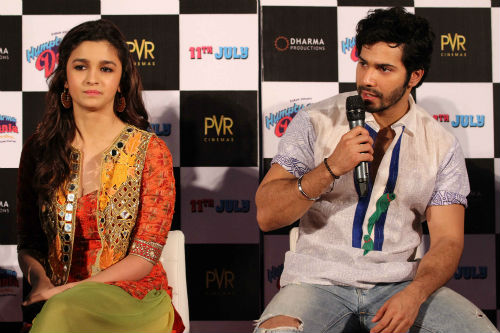 How much truth is there about the news of your alleged affair with Varun Dhawan?

When did that happen? Last time I heard my name being linked to someone, it was Arjun (Kapoor) during 2 States. Now they have already linked me to Varun? Well, what to do? Now, my next film will be with some other hero and I will be again linked to him.

But you have been linked to Varun since your debut film Student Of The Year (SOTY).

Is it true that you are the mastermind behind the launch of humfie poster of Humpty Sharma Ki Dulhania?

Yes, it was my brain at work and I am very proud of it. During shooting of the film everyone was saying “We have to do something innovative”. I am very fond of selfies. So I said “Let us all take selfie posters” and I very casually said “Let’s call it humfie”. Everyone shut me up at that time but eventually they liked it and used it.

I did not take a selfie with Varun, I took a humfie. So it’s not the same thing. You can’t compare the two.

Why should one watch Humpty Sharma Ki Dulhania?

It is a filmy love story. No matter how cliched and unromantic you are in your life you always want your love story to be a ‘story’. Like, everyone asks “How did you meet?” and all. So this is our tribute to all the filmy love story out there.

Who is your favourite actress?

My all-time favourite actress is Kareena (Kapoor). Of the yesteryears, there are Rekha, Shabana Azmi and Waheeda Rehman.

Why is that you did not make your debut with Vishesh Films (film production company owned by Alia’s father Mahesh Bhatt and her uncle Mukesh Bhatt)?

The answer is obvious. Had I debuted in my father’s film, everyone would have said she got the easy way out.

But don’t you want to work in your father’s film?

How does Mahesh Bhatt see you as an actor?

Well, after Highway I feel he has started getting convinced that I too can act.