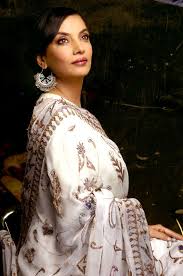 India Blooms News Service | | 22 May 2015, 08:04 pm
#Shabana Azmi, # Shabana Azmi street shopping time
Mumbai, May 22 (IBNS): Actress Shabana Azmi has been smitten by her character in Chalk n Duster so much, that she's been on a shopping spree these few days.

The movie sees her play an experienced teacher and just to get in to the shoes of her character, the actress went street shopping.

The actress bought bindis and bangles while out shopping on the streets of Andheri, Santa Cruz, Bandra and Churchgate.

It common knowledge that teachers are underpaid these days, so wearing a designer sari wouldn`t seem convincing to the audience, and it wouldn`t blend with the theme and the plot. Hence, Shabana went on a shopping spree. Besides buying bindis and bangles, she even bought chappals and saris.

When the director approached Shabana and narrated her the story, she gave an instant nod as she liked it very much. The story had an everlasting effect on her. She was moved by the dreadful condition of teachers in the country and was compelled to take it up.

Chalk n Duster is about teachers, the education system and the commercialization of the system in the country.

Chalk n Duster is written by Ranjeev Varma and directed by Jayant Gilatar. The music is composed by Sandesh Shandilya, while the lyrics for the film are penned by the seasoned Javed Akhtar. The movie is produced by Subhash Singh and Sonali Singh under the 3S Creations banner.