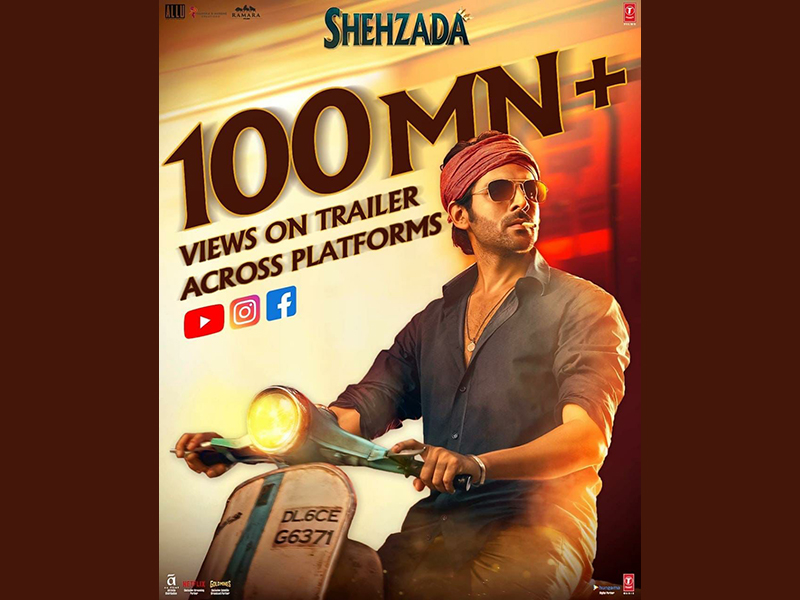 Mumbai: Actors Kartik Aaryan’s Shehzada is the latest talk of the tinsel town.

The audience is waiting eagerly for the release on the big screen.

When the first look of the film was being played in theatres, people were going gaga over it & shared it on social media, expressing how eagerly they are waiting for the release of the film.

The entertainment-packed trailer was released barely a fortnight ago & has already crossed over 100 million views.

The count is strongly marching forward as we speak.

It was the most historic trailer release and celebration in Indian cinema - with band, baaja and Shehzada having a Royal entry amidst masses and fans. The lead duo also celebrated the release of the trailer in 3 major cities of India with their fans.

In this most awaited film, Kartik Aaryan will be seen doing some intense action sequences for the first time.

His kicks and punches have had the female fans hooting & screaming for him.

The young superstar has also turned producer with this action family Entertainer. Kriti Sanon is going to be seen in the most glamorous avatar after a long time & she is already raising degrees.

What’s keeping the moviegoers excitement level 100 is the fact that the duo pair up again and their chemistry is being loved by all. Kartik strikes a hot chemistry with all his leading ladies, and this one too has grabbed the eyeballs.

The music is by Pritam in this family entertainer and produced by Bhushan Kumar, Allu Arvind, Aman Gill and Kartik Aaryan. The film is all set to release on 10th February 2023.