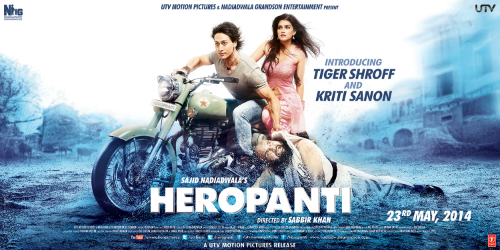 The first of the three new dialogue promos is titled 'Roka Kyu Yaar' and it shows the lead actor Tiger Shroff being hit by goons.

It also gives the fans a glimpse of the easy going nature of the protagonist and his relationship with the female lead Kriti Sanon in the movie, as well as a glimpse into the action from the movie.

The next dialogue promo is named 'Kya Karega? Marega' and it consists of brilliant stunts and amazingly executed action sequences by Tiger.

The last in the line of videos is the one titled, 'Love Story', where the fans will get a chance to see the leading couple together as they face their enemies and overcome obstacles in love.

The light hearted conversations between the two are a treat to watch.

Through these dialogue promos, the debutantes leaves their fans in awe of their performance.

Considering the unprecedented reception to it songs, dialogue promos and trailer, the makers are sure to see packed houses in cinemas next week.

Produced by Sajid Nadiadwala, the movie is slated to release on May 23.