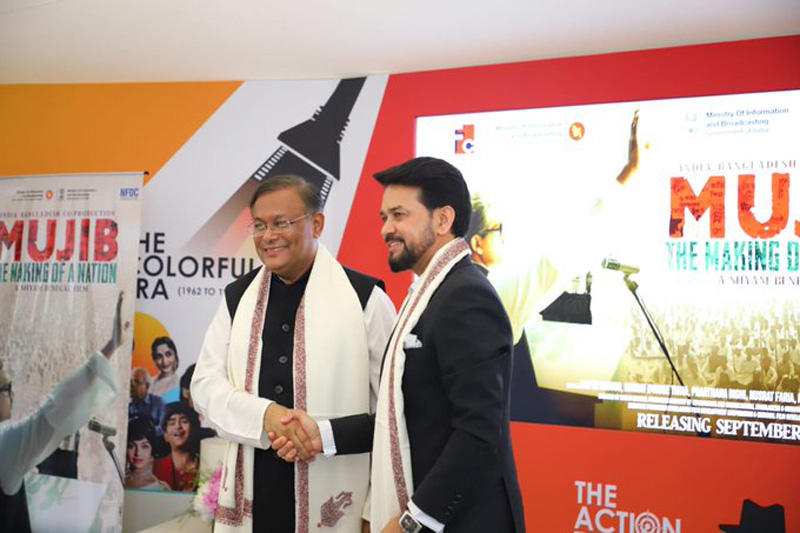 Cannes: Union Minister of Information and Broadcasting Anurag Thakur and Minister of Information and Broadcasting of Bangladesh Dr Hasan Mahmud on Thursday jointly released a 90-second intriguing trailer of the India – Bangladesh co-production feature film on ‘Bangabandhu,’ Mujib – The Making of a Nation directed by Shyam Benegal.

Addressing the audience on the occasion Union Minister Anurag Thakur said that the movie, while being a co-production of India and Bangladesh, was an initiative of Prime Minister Narendra Modi.

“The movie is a gift on birth centenary of Bangabandhu Shekh Mujibur Rahman ji,” the Minister commented. Commenting on the struggles in the making of the movie, Thakur said that when the world was going through a challenging time during the COVID pandemic, the work on the movie went on.

When the world is seeing strife between various neighbouring countries, Thakur cited the movie as an example of good neighbourly ties.

🎞️"Mujib – The Making of a Nation" a film by Shyam Benegal

📀Based on the life of Sheikh Mujibur Rahman.

Through the movie, the two countries complement each others’ work.

Anurag Thakur said that this year being the 75th anniversary of India’s independence and India being the Country of Honour at Marche du Film, there could be no better opportunity to release the trailer and put the friendship of India and Bangladesh on display.

He thanked the whole Bangladesh delegation for attending the ceremony.

Dr Hasan Mahmud, in his address, said that the movie was based on the struggle, suffering and making of a nation by Bangabandhu Sheikh Mujibur Rahman.

Complementing the ties between the two countries he said that Bangladesh and India relationship had touched new highs under the leadership of the two Prime Ministers Sheikh Hasina and Shri Narendra Modi.

It is a India Bangladesh Co-Production film by Shyam Benegal pic.twitter.com/b2a06CRDFy

“The movie was a demonstration of the strength and depth of relationship between the two countries,” Dr Mahmud added.

The Minister thanked the people of India for supporting the independence war of Bangladesh in 1971.

The Minister also said that Bangladeshis will always remember the sacrifice of Indian soldiers.

Speaking about the movie, Dr Mahmud said that the movie was about the struggle, pain and suffering of Sheikh Mujib in liberating a nation.

“People of the world will know how he remained unwavering in the face of gallows and how he transformed an unarmed nation into an armed one and led the liberation war. It isn’t easy to capture the whole life of such great people in 3 hours but the team making the movie has done a great work,” he further added.

Delivering his message in a recorded message, Shyam Benegal, said that, “The trailer is out and I hope the audiences will appreciate it. It was an absolutely marvellous journey working for this film as I got an opportunity to work with the artists & technicians from both the nations. And thankful to Ministries from India & Bangladesh for their overwhelming support.”