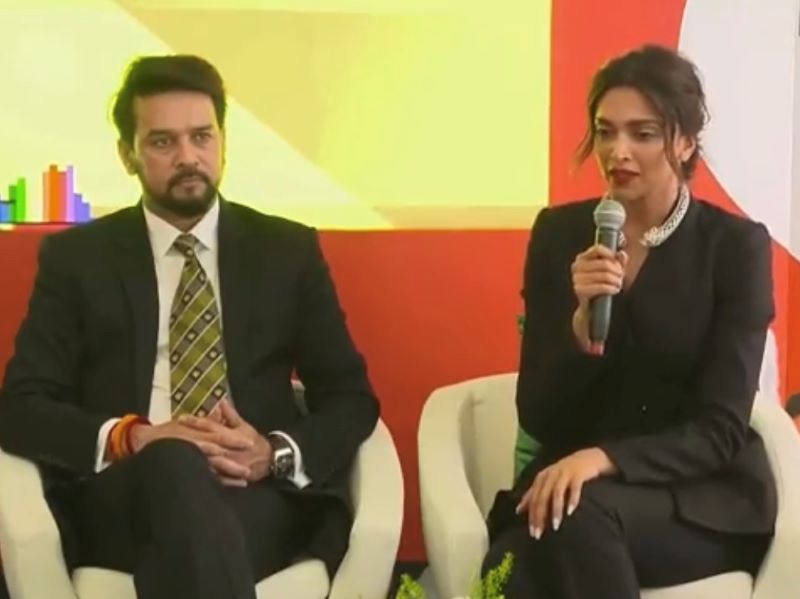 Cannes will be in India one day: Deepika Padukone at Indian pavilion inauguration in the film festival

Cannes/IBNS: Bollywood's leading actor Deepika Padukone, who is a part of the jury in Cannes 2022, boasted about her country's prospects in the future at the inauguration of the Indian pavilion here Wednesday.

Speaking at the inauguration, Padukone, seated beside Union Information and Broadcasting Minister Anurag Thakur, said, "I truly believe that India is at the cusp of greatness. This is just the beginning... I feel we have a long way to go as a country. I feel really proud today as an Indian to be here and represent the country.

"But when we look back 75 years of Cannes, there were literally a handful of Indian films or actors or talents that have been able to make it and I feel like collectively as a nation, we have the talent, ability and I think we just need that sort of conviction. I truly believe there will come a day when India won't have to be at Cannes but Cannes will be in India."

Padukone, who stole the limelight Tuesday with her saree and an off-shoulder blouse, adorned a formal in black at the Indian pavilion Wednesday.

#WATCH "India is at the cusp of greatness, this is just the beginning...there will come a day I truly believe where India won't have to be at Cannes, but Cannes will be in India," says Deepika Padukone at the inauguration of India Pavilion at the 75th Cannes Film Festival pic.twitter.com/66z9RLw2L0

Speaking about herself and her becoming the jury at the prestigious festival, the 36-year-old actor said, "I am feeling very proud because it's the 75th year of Cannes and also India. And to have India as the spotlight country and to be a part of the jury is something I have never imagined and expected."

"When I came to the industry 15 years ago, I don't think anyone had faith in my talent or craft. So 15 years later to be a part of the jury and to actually be experiencing some of the best cinemas in the world has been an incredible journey and I am truly grateful for that," Padukone, who made her Hindi film debut in 2007, added.

Padukone, who checked into the French Riveria Monday, began her duty as a jury member a day later, at the opening of the 75th edition of the prestigious Cannes Film Festival.

Padukone has been a regular at the festival for a few years now but this time it's, even more, bigger and more special for the Indian actor to have made it to the jury panel.

Along with Padukone, other Indian actors R Madhavan, Tamannaah Bhatia, Nawazuddin Siddiqui are also participating in the festival.