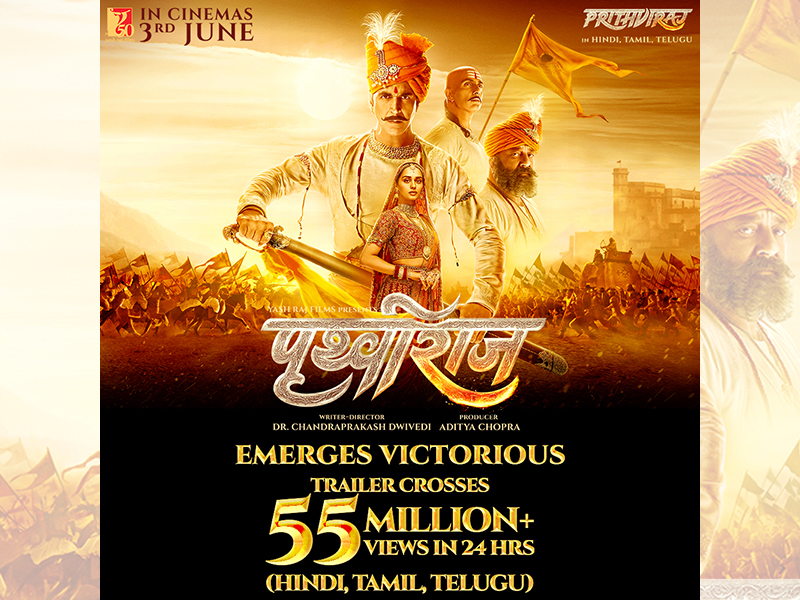 New Delhi: The highly anticipated trailer of ‘Prithviraj’, YRF's first ever historical film starring the versatile actor Akshay Kumar and stunning Manushi Chhillar, has been trending worldwide since its release.

Within just 24 hours of its grand launch event at YRF Studios in the presence of media and fans, the trailer has created a massive buzz and has galloped past 55 million views across all three languages (Hindi, Tamil, Telugu)on YouTube and Facebook.

During the trailer launch event Akshay Kumarquoted, “I want everyone to watch the story of Samrat Prithviraj Chauhan. When I was narrated the film, I had goosebumps through the narration and immediately said yes to the project because the script blew me away. It is an outstanding script, a true find that brings together history, patriotism, portrayal of the values that we should live by and also tells a story of love that is extremely rare to find.”

Within few hours of the release, the trailer of the cinematic brilliance was trending at No. 1 on YouTube.

It has been getting rave reviews, with some users calling it a blockbuster trailer and a potential ‘box office record breaker’.

'Prithviraj', based on the life and heroism of the mighty warrior Samrat Prithviraj Chauhan has superstar Akshay Kumar playing the titular role.

The gorgeous Manushi Chhillar, who makes her debut with the film, is portraying the gorgeous princess Sanyogita –Prithviraj’s lady love.

Directed by Dr. Chandraprakash Dwivedi (Padma Shri), best known for directing the television epic Chanakya and the critically acclaimed film Pinjar, the movie is set to release worldwide in cinemas on June 3.