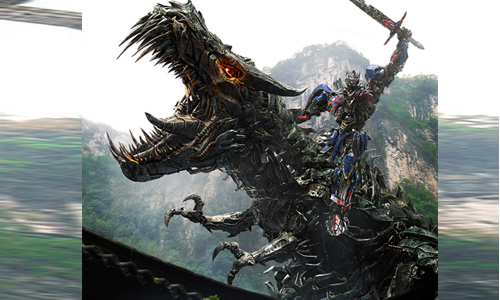 India Blooms News Service | | 16 May 2014, 05:55 pm
#Transformers 4
Mumbai, May 16 (IBNS): The makers of the blockbuster hit franchise Transformers recently released the poster of their latest sequel, Transformers: Age of Extinction.

The poster exhibits the brave Autobot leader ‘Optimus Prime’ in his usual majestic style sitting on Grimlock, the mighty Dinobot ready for a fight.

The words 'Stand Together or Face Extinction' are displayed across the top of the grand poster.

'Transformers: Age of Extinction' revolves around a mechanic and his daughter as they make a discovery that brings down Autobots and Decepticons - and a paranoid government official - on them.

Presented by Paramount Pictures,  'Transformers: Age of Extinction' is slated for a Jun 27 release.

The film will be released by Viacom18 Motion Pictures in India.