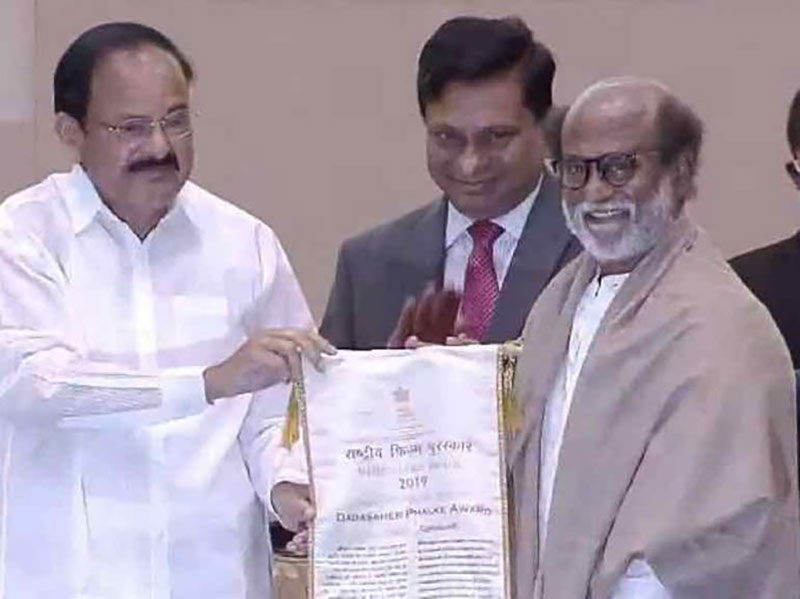 New Delhi/UNI: Superstar Rajinikanth was awarded the prestigious Dadasaheb Phalke Award at the 67th National Film Awards ceremony on Monday for his unprecedented contribution to the field of cinema.

Rajinikanth has become the 51st recipient of Dadasaheb Phalke Award.

"Congratulations Sh @rajinikanth ji on receiving India's highest film honour the Dadasaheb Phalke Award at the 67th National Film Awards. You are not only a legendary icon, but an institution for the world of Indian Cinema!" Thakur tweeted.

The award for Best Actress went to Kangana Ranaut for her performance in Hindi feature films 'Manikarnika' and 'Panga'.

'Manoj Bajpayee and Southern cinestar Dhanush shared the honor of Best Actor for their performance in 'Bhonsle' and 'Asuran', respectively.

Pallavi Joshi won the award for Best Supporting Actress for 'The Tashkent Files', a movie based on the second Prime Minister Lal Bahadur Shastri.

The award for Best Supporting Actor was given to Vijay Sethupathi for his performance in 'Super Deluxe'.

The 67th National Film awards were announced in March 2021 but honoured the best in cinema in 2019. The awards were postponed due to the pandemic.