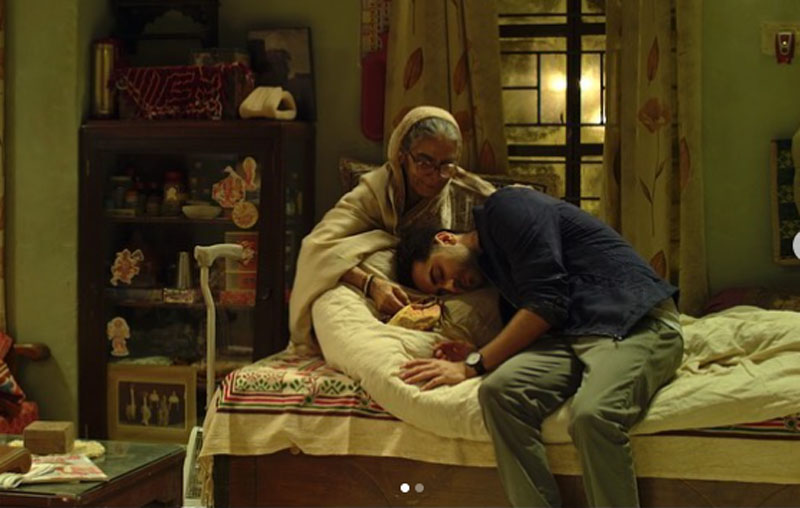 Mumbai:  Badhaai Ho actors, including Ayushmann Khurrana and Neena Gupta, joined to remember their colleague and actress Surekha Sikri Rege as she died on Friday.

Neena Gupta said she felt sad after hearing of the death of the actor.

She posted a video on Instagram to express her sadness.

Actor Ayushmann Khurrana, who played a lead role in the film, posted on Instagram: "In every film we have a family and we end up spending more time with the film family than our own families. One such beautiful family was in Badhaai Ho. Out of all my films, it was the perfect family with a perfect cast. Surekha Sikri was the head of our family, who was more progressive than the entire family tree. You know what, that was her in real life too. A complete boho. A chiller. Young at heart."

"I remember when she was boarding an auto rickshaw after the screening of our film, Tahira and I gave her a lift back home and we said 'ma’am you are the real star of our film' and she replied 'wish I get more work.' Tahira and I were speechless. We watched her frail demeanour walking towards her building. That’s my last memory of her," he said.

"An impeccable performer. A consummate artiste. A legend. You’ll be missed Surekha ma’am. 🤍  Thank you for the beautiful memories.🙏🏽 #RIPSurekhaSikri," he said.

Ayushamann had played the role of the late actor's grand son in the movie which hit the silver screen in 2018.

Another Badhaai Ho actor Gajraj Rao said: "Making a film is like travelling in a train, where the journey is a destination in itself. You meet all kinds of co-passengers here. Some open up their tiffins and hearts to you, while some guard their luggage and eye you with suspicion. Badhaai Ho will always be that special train journey which brought me to a new station in life, and I'm truly thankful that we had someone like Surekha ji as the emotional anchor of this ship. She was definitely the youngest at heart on the sets, and had no airs about her stature or endless experience as an actress. Her craft was defined by her years of homework and 'riyaaz' as an actress, combined with a child-like enthusiasm."
"As all journeys must end eventually, we bid goodbye to Surekha ji today. Thank you, Surekha ji, for all the wisdom and memories you have left us with. #RIP #SurekhaSikri," he said.

Surekha Sikri, who had won hearts essaying the matriarch of a traditional rural Rajasthan family in the long-running teleserial Balika Vadhu, passed away on Friday. She was 75.

Sikri, who was suffering from illness for some time, died after suffering a cardiac arrest.

She had suffered a paralytic stroke earlier in 2018 and a brain stroke in 2020.

Sikri, who had acted in theatres, films as well as on television, began her career in 1970s with political satire Kissa Kursi Ka (which was banned during Emergency before its release in 1979).