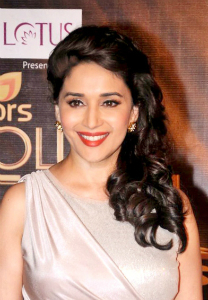 India Blooms News Service | | 15 May 2014, 09:44 am
#Madhuri Dixit birthday, # Madhuri Dixit 47
Mumbai, May 15 (IBNS): Bollywood's 'Dhak Dhak' girl Madhuri Dixit-Nene, who has charmed over her audience once again with her acting skill, screen presence and dancing talent after her comeback to films, turned 47 years of age on Thursday.

Madhuri made her debut in the silver screen with the film 'Abodh' in 1984 and received wider public recognition with 'Tezaab' in 1988.

She went on to establish herself as one of Hindi cinema's leading actresses, acknowledged for several of her performances, her beauty and her accomplished dancing.

In 2002, she took a break from films to raise her children and made a comeback with the musical 'Aaja Nachle' in 2007. The film was highly praised and Madhuri garnered appreciations for not just her acting but for her dance performances as well.

She has last featured in women-centric films like 'Dedh Ishqiya and 'Gulaab Gang'.