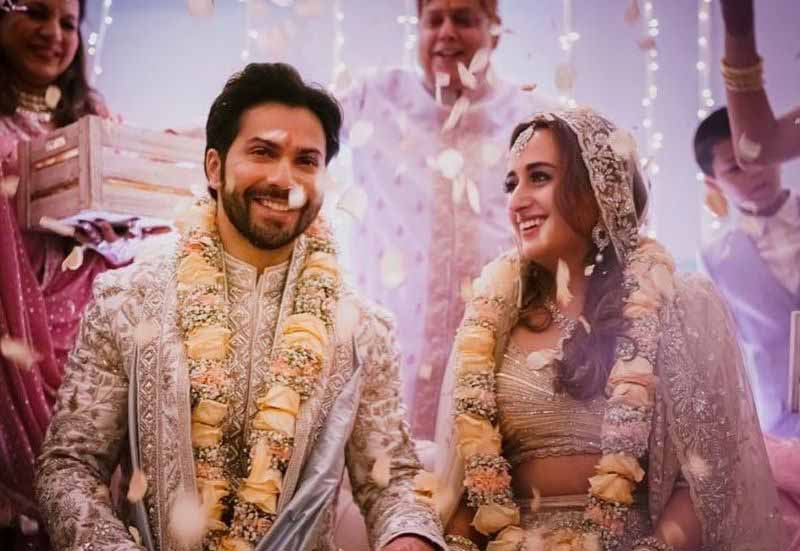 Mumbai/IBNS: Bollywood celebrities have showered their wishes on actor Varun Dhawan and his wife Natasha Dalal, who tied their nuptial knot on Sunday.

Dhawan and Dalal, who have been dating for years, got hitched at Alibaug in Maharashtra.

Wishing the newly-wedded couple, filmmaker-producer-actor Karan Johar, who gave the first break in Bollywood to Dhawan, said in a long post on Instagram, "I am filled with a multitude of emotions and memories as I write this post! I still remember meeting this kid in goa! Long hair, big dreams in his eyes and a swag that was waiting to explode on celluloid! A few years later he was my Assistant on MNIK!

"I silently observed his determined sincerity and also how hilarious he can be ...sometimes even unintentionally! When he faced the camera for me for the first time I developed an immediately protective feeling of love and care for him..: almost assuming the role of a parent.... that feeling today came alive in abundance as I saw him walk with his loved one around the holy fire of trust and commitment... my boy is all grown up and ready for this beautiful phase in his life... congratulations my darling Natasha and Varun! My blessings and love forever ....love you."

Actor Priety Zinta said on Instagram, "Congratulations and all the very best Varun Dhawan and Natasha Dalal as you both start a new and exciting journey together ❤️❤️ Wish you guys loads of love, happiness and togetherness always. Welcome to the Married Club."

Dhawan's co-star from his last film Coolie No. 1, Sara Ali Khan wrote on Instagram story, "My dearest Varun and darling Natasha, wishing you all the love, luck, happiness and togetherness forever."

The wedding pictures were shared by Dhawan on his Instagram profile with a caption which reads, "Life long love just became official."

Singer Armaan Malik commented on the post, "Congrats Varun! So happy for you and Natasha."

Shahid Kapoor said, "Many congratulations to both families. God bless. And welcome to the dark side."

Keeping Covid-19 protocols in mind, Dhawan and Dalal reportedly had a limited guest list of 40-50 people.

They followed a strict no-phone policy at the wedding and security was increased outside the Alibaug wedding venue - The Mansion House. The couple also made Covid-19 tests mandatory for those attending the wedding, reports NDTV.

Dhawan, the son of filmmaker David Dhawan, made his acting debut in 2012 with Johar's teen drama Student of the Year.