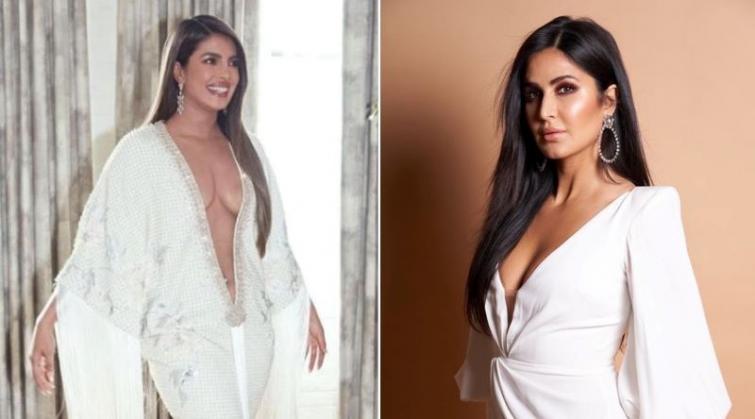 Mumbai/IBNS: After Disha Patani and Hina Khan, Bollywood actress Katrina Kaif came out in support of her colleague Priyanka Chopra Jonas who was criticised for wearing a revealing attire at the Grammy Awards this year.

In the award ceremony, Priyanka was seen wearing a dress with a neckline plunging below her navel.

Though Priyanka scorched the red carpet along with her singer husband Nick Jonas, late celebrated designer Wendell Rodricks slammed the actress saying, "there is an age to wear some clothes".

Thinking otherwise, Kaif, during a recent interview with ETimes, said, "I honestly have no idea what anyone else said about Priyanka’s outfit but I saw the outfit and I thought she looked beautiful in that outfit.

I thought she looked absolutely stunning. So, I don’t know what anyone else said but I don’t think they saw the picture properly."

So proud of this fam. Congratulations @jonasbrothers you guys crushed it today. #grammys

Drawing ire from Priyanka's fans, Rodricks wrote on Instagram, "Of course not many saw my sarcasm. It’s not for her this @ralphandrusso That said Ralph n Russo are the only American USA designers accepted by the Chambre Syndicale de la Haute Couture Francaise. Their work is exquisite."

Later, he again wrote on Instagram, "For all those that said some really nasty things about me body shaming, here is my retort. Did I say anything about her body? No. Many women did. I just said the dress was wrong for her despite it being couture. It was more dress shaming than body shaming. Stop this sermon from high and read the post before you speak. There is an age to wear some clothes...."

In an interview with Zoom, Patani, who often becomes victim of various social media trolls for her bold outfits, had said, "She looked beautiful and honestly it's kind of a mentality that someone from one's own country is wearing certain kind of clothes always kinds of trolling them but if you see someone else from outside Oh! She looks so beautiful..."