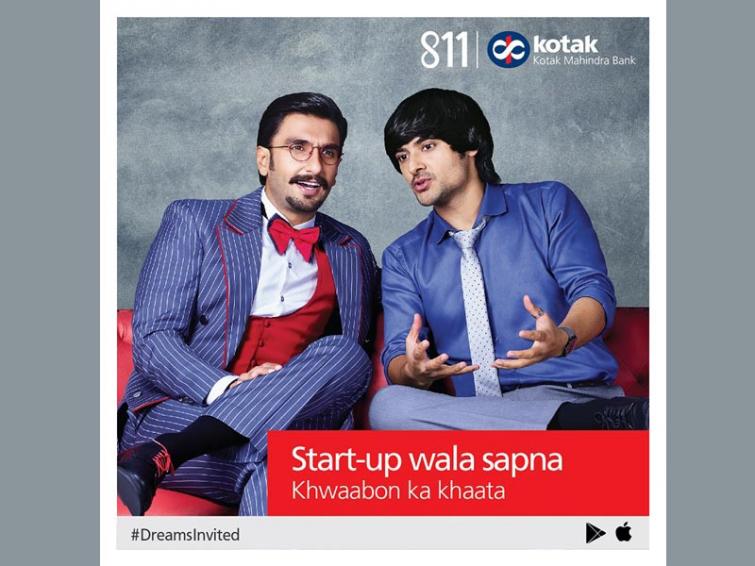 #DreamsInvited also features Indian track and field legend, PT Usha, in a pivotal role as well as a host of other ‘dreamers’.

As a self-made actor who has succeeded in Bollywood on his own terms, Ranveer Singh is the ideal face of the #DreamsInvited campaign, the company said in a release. PT Usha is the pride of India. She embodies grit and mettle and the fact that hard work can take one a long way, it said.

"#DreamsInvited is a tribute to a billion plus Indians and their audacious dreams. The central plot revolves around #KhwaabonKaKhaata – the all-in-one 811 digital bank account, which is open to all and designed to financially empower the dreamers so that they have one less problem to worry about in the pursuit of their dreams. The story is packaged with humour and entertainment, led by the cast of Ranveer Singh and PT Usha," a press release by Kotak Mahindra Bank said.

Karthi Marshan, Chief Marketing Officer, Kotak Mahindra Group said, “Right from its very origins, Kotak has been in the business of helping Indians across segments and geographies realise their dreams. In 2018, with our 811 #IndiaInvited campaign, we reached out to all Indians, especially the unbanked & under banked, and took giant strides towards making banking services accessible to all Indians. The new #DreamsInvited campaign builds on this narrative by acknowledging the changing mindscape and narrative of a new India and encouraging Indians to dream big and pursue their dreams, no matter how strange or incredible their dream might seem to others. Kotak 811 is open to one and all.”

#DreamsInvited is set in Dreamland Guesthouse, a modest suburban hotel in Mumbai - the city of dreams, where people from various walks of life and different parts of the country come to stay in pursuit of their aspirations.

Ranveer Singh, in the lead role of a Hotel Manager, plays the protagonist who has the unique opportunity to observe people up close in the pursuit of their dreams.

Much like Kotak 811, he doesn’t judge his guests but instead helps these dreamers move a step closer to their dreams. #DreamsInvited also features PT Usha – as herself – one of India’s most notable legends who dared to dream, defy norms and script history.

Elizabeth Venkataraman, Senior Executive Vice President & Head of Marketing, Kotak Mahindra Bank said, “We are seeing an exciting new wave of people, who regardless of their background or age or gender, have a dream and are prepared to go all out in their quest to achieve that dream. The film is inspired by some true stories, such as the one about the ballet dancers featured in our campaign. The boys had an unconventional dream to be ballet dancers on the world stage and their dream has come true. Dreams don’t judge and neither does Kotak and hence, the Kotak 811 #KhwaabonKaKhaata.”