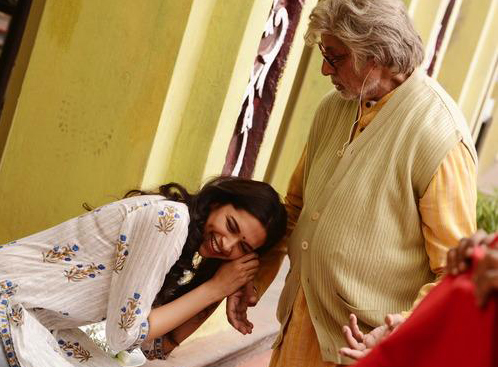 It's Baba Big B for Deepika!

India Blooms News Service | | 29 Jan 2015, 01:50 pm
# Piku
Mumbai, Jan 29 (IBNS): We got you the news that Deepika and Irrfan's unusual chemistry in Piku has surprised everyone on the sets of the film! Now, we have got some more dope on the film.

And there is more…We have been told that Deepika and Amitabh also bonded big time on the sets, so much so that the Bollywood’s top notch actress, started calling AB senior ‘Baba’, meaning father. A source present on the sets confirmed the news saying, “Yes, Deepika does call him 'Baba' on and off the sets.”

If that wasn’t enough, here’s more. The moment everyone on the sets came to know about this, all present on the sets started referring to Bachchan senior as Baba including actor Irrfan Khan. All of this, out of respect and love for the living legend of Indian cinema!

On his part, Big B too has actively taken to twitter to upload pictures of some amazing moments between him and Deepika.  The media has been abuzz with images and stories showcasing the rapport they share so much so that Amitabh Bachchan was often reminded of his daughter during the shoot. With both the actors working together in Piku for the last few months, their camaraderie is surely something to look forward to.

A family comedy drama, Piku is based on a quirky father-daughter relationship essayed by Amitabh Bachchan and Deepika Padukone with Irrfan Khan top-lining the cast, in a pivotal author backed role.