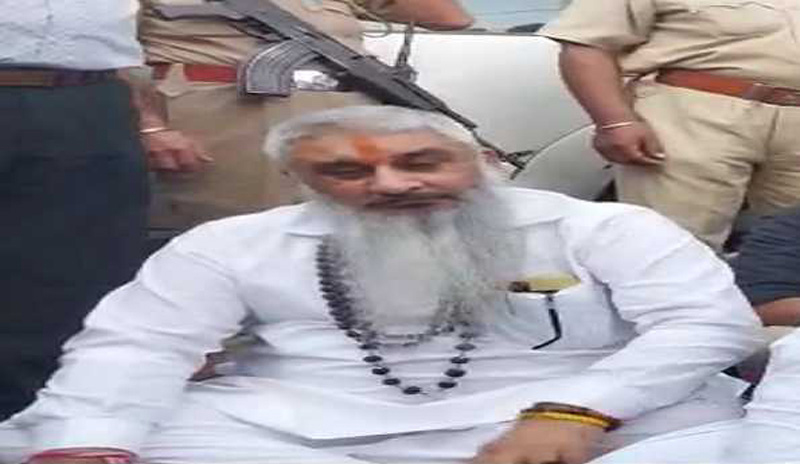 The Sudhir Suri killing in Amritsar on November 4, 2022, is a direct outcome of the intentional politics of hate and communal polarization that is actively being encouraged by major political parties at the Centre and in the state, and that the victim had himself long been engaged in.

It has little to do with any purported Khalistani resurgence, or with the supposed and ‘complete breakdown of law and order’ under the Aam Admit Party (AAP) government in the state – the two tropes that are currently dominating media and political commentary on the issue.

While no significant disclosures have yet come from the police investigators, present indications are that Sandeep Singh aka Sunny, the accused in Suri’s murder, acted on his own. However, some recoveries suggest he may have been ‘inspired’ by the radical pro-Khalistan preacher Amritpal Singh, who presently heads Waris Punjab De (WPD, Heirs to Punjab), a group formed during the farmers’ agitation by actor and activist Deep Sidhu. Sidhu was killed in a road accident on February 15, 2022. Amritpal Singh took over a faction of WPD on September 29, 2022. However, initial disclosures indicate that Sandeep Singh was ‘self-radicalized’.

Significantly, according to police sources, because of his provocative statements Suri had been on the hit list of almost every terrorist module that had been arrested in the recent past, including those responsible for the rocket propelled grenade (RPG) attack on the Punjab Police Intelligence Headquarters at Mohali on May 9, 2022. However, an approach by these organized groups was difficult, given the significant security Suri had been provided by the police.

However, Sandeep Singh was able to secure access because he was familiar to most people in the Majitha Road locality, where he had a shop, and was consequently able to approach and attack Suri. He used a .32 bore licensed weapon to kill Suri in broad daylight, in the presence of a large contingent of Police, including the personnel provided for his own protection, as well as a local Deputy Superintendent of Police and a Station House Officer, who were trying to get Suri to end his protest outside the Gopal Mandir on the crowded Majitha Road in Amritsar.

An unverified post on social media, purportedly by Canada-based Punjab-origin gangster Lakhbir Singh aka Landa aka Landa Harike claiming responsibility for the Suri killing has been given little credence by the police, though ‘every angle is being investigated’. Landa has also been associated with the Pakistan-based Harvinder Singh aka Rinda, of the banned Khalistani terrorist formation, Babbar Khalsa International (BKI). Rinda is an aide to BKI ‘chief’ Wadhawa Singh Babbar, also located in Pakistan.

The investigations into the Suri killing are at an early stage, and little that is definitive could be said about Sundeep Singh’s motivation and affiliations at this stage. Reports suggest that personal animus may be the principal provocation for the murder.

It is, nevertheless, useful to address the flood of falsehoods that are creating the impression of a security breakdown and ‘resurgence’ of the Khalistani movement in the State, as well as of AAP ‘failure’ in this regard, propaganda principally fueled by ‘losers’ in the Punjab Assembly elections of February 2022 – the Congress Party, the Akali Dal, and the Bharatiya Janata Party. AAP swept the elections, winning 92 of 117 seats.

Crucially, there has not been a single fatality directly linked to Khalistani terrorism in 2022, till date, unless the Suri killing eventually comes to be categorized as such. Two incidents, prior to the Suri killing, have most frequently been cited as evidence of the ‘breakdown of law and order’ in Punjab – the killing of popular singer Shubhdeep Singh Sidhu aka Sidhu Moosewala on May 29, 2022; and the rocket propelled grenade (RPG) attack on the Punjab Police Intelligence Headquarters at Mohali on May 9, 2022. There were no casualties in the latter incident, which was traced back to Lakhbir Singh aka Landa, and Harvinder Singh aka Rinda. The Sidhu Moose Wala killing, moreover, was essentially a gangland rivalry between the Devinder Bambiha group and the Lawrence Bishnoi gang, and had been preceded by a succession of tit-for-tat killings over the past years. Bishnoi’s Canada-based associate Satwinderjit Singh aka Goldy Brar claimed responsibility for the killing in a video message posted on social media.

While both incidents were serious, they are far from representative of any abrupt collapse of administration after the AAP government came to power. Indeed, past years have seen several incidents directly linked to Khalistani terrorism – most of them connected with elements in the extremist fringe of the Sikh Diaspora. Significantly, there were no Khalistan terrorism-linked fatalities between 2008 and 2015, but each year between 2016 and 2021 recorded one or more such killings, including a spate of nine targeted killings and at least another four failed attempts in 2016 and 2017, by a single two-man cell, tied in to conspirators in the UK and Pakistan.

Data for 2021 and 2022 is not yet publicly available. However, on April 11, 2022, the then Director General of Police (DGP), Punjab, Viresh K. Bhawra, disclosed that, since January 1, 2022, 16 modules of criminal gangs had been neutralized, and 98 arrests had been made in this connection. Six gang-related murders had been recorded in the state in the first quarter of the year, and 24 accused had been arrested in these cases. Further, Bhawra stated that the first quarter of 2022 had seen an average of 50 murders per month, as compared to an average of 60 per month in 2021 and 65 in 2020.

Further, Bhawra added, of 545 'A', 'B' and 'C' category gangsters in the state, effective action had been taken against 515 over the preceding years, while 30 were yet to be arrested. Eight gangsters had been gunned down in encounters, prominently including Vicky Gounder, Prema Lahoria and Jaipal, during the tenure of Captain Amarinder Singh as Chief Minister. Many of the gangsters had shifted their base out of Punjab as a result of effective police action.

There is no indication of any radical departure from these trends in 2022, or since AAP took over.

None of this is, of course, intended to suggest that all is well in Punjab.

Perhaps the most troubling development in this context is the increased coordination between criminal gangs and Khalistani terrorists, coordinated by terrorist and gang leaders located abroad, to engineer acts of terrorism, as well as to run drug-extortion-target killing operations in Punjab. The role of Pakistan’s Inter Services Intelligence is particularly visible in these evolving networks, and in the veritable explosion of drone borne ‘composite consignments’ – consignments of drugs and weapons – that are being dropped into Punjab with increasing frequency. According to an October 12, 2022, report, Security Forces (SFs) have observed the illegal entry of at least 171 drones across the India-Pakistan border along the Punjab sector from Pakistan, in the first nine months of the year. Several such flights are likely to have escaped observation along Punjab’s 425 kilometre-long border with Pakistan. In addition to other avenues of smuggling, this would indicate a significant build-up of a reserve of weapons and ammunition available to gang and terrorist combine in Punjab, adding enormously to the potential security risk in the state.

Significant action has been taken recently against the flood of drugs in the State. On October 31, 2022, the Punjab Police disclosed that it had arrested 6,997 drug smugglers and registered a total of 5,346 First Information Report (FIR)s in the preceding four months in its ongoing drive against narcotics. Police recovered close to 260 kilograms of heroin from across the state, in addition to 300 kilograms of opium, 197.2 kilograms of ganja (marijuana), 293 quintals of poppy husk, and 27,56,000 tablets, capsules, injections and vials of pharmaceutical opioids from across the state.

It is useful to remind ourselves, here, that the organized crime – terrorism linkage has a downside for the Khalistanis as well. There is tremendous anger against the drug trade in Punjab, with thousands of families facing ruination as a result of addiction of some of their members. Other gang activities – extortion, kidnapping and murders – can only further delegitimize those associated with such groups, and the Khalistanis cannot escape this consequence. As pretenders to a noble religious tradition, their complicity in such crimes and association with such gangs cannot be reconciled with their projections as defenders of the Faith.

However, a dramatic growth of religious radicalization – globally, nationally and within Punjab – is an increasingly manifest reality. Within Punjab, the Khalistan movement has periodically reminded us of its existence through occasional acts of terrorism as well as reports of arrests, seizures of weapons and a range of subversive and propaganda activities. However, there is evidence that the extremists have found little or fitful traction on the ground. Very few among those involved in the occasional acts of terrorism have been ideologically driven, some of them were not even Sikhs, and most have been mercenaries linked to criminal gangs.

Nevertheless, there is a rising flood or Khalistani propaganda, particularly on social media, and indications that the idea of Khalistan may once again find some resonance among the youth, particularly in Sikh Diaspora communities, but also within Punjab. Moreover, activities of radical ‘influencers’ such as Amritpal Singh, and his ambition to establish units of his faction of WPD across the villages and towns of Punjab, are setting off alarm bells in the security establishment.

It is useful, however, to remind ourselves constantly that Hindu and Sikh extremism are feeding off one another, creating an atmosphere fraught with danger. Communal polarization and hate speech have become deeply entrenched in electoral politics at every level, finding their strident echoes in the bedlam of social media. This can only bode ill for the security of the state and of the nation.

Crucially, individuals and groups such as Sudhir Suri’s Shiv Sena (Taksali) and its mirror Khalistani extremist formations need to be brought under the constraints of law with far greater urgency than is presently the case. The Punjab Police has now set up a committee to examine the security of 16 Hindu leaders and VVIPs in the state. While such a measure is necessary, particularly in view of the abrupt reduction of the security details for several persons, including Sidhu Moose Wala immediately before his killing, there is an equally urgent need to review the provision of police security to communal provocateurs who seek to incite hatred between communities, and to orchestrate violence in the state.