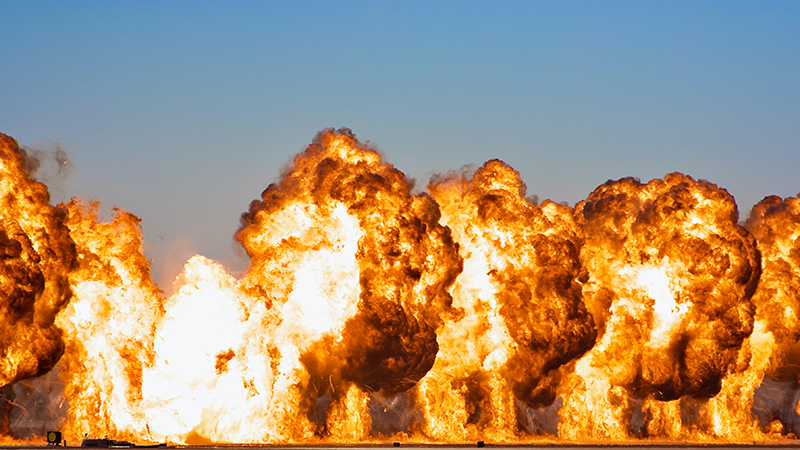 On October 23, one person, identified as Jameza Mubin, died in an early morning explosion in a gas cylinder-laden Maruti 800 near the Kottai Eswaran Temple in Tamil Nadu's Coimbatore District.

There were two LPG cylinders inside the vehicle, of which one exploded. As reported on October 26, this incident took place around 200 metres from a Police patrol.

Following the incident, on the night of October 24, five persons were arrested under the Unlawful Activities (Prevention) Act (UAPA), and under Section 120B (punishment for criminal conspiracy) and 153A (promoting enmity between different groups) of the Indian Penal Code (IPC).

The arrested were identified as Muhammad Talka, Muhammed Azharuddin, Muhammed Riyaz, Firoze Ismail and Muhammed Nawaz Ismail, all in their 20s. Afsar Khan who is a cousin of the deceased Mubin, was also arrested on October 26, the sixth arrest in this case. City Police Commissioner V.

Balakrishnan disclosed that 75 kilograms of potassium nitrate, charcoal, sulphur and aluminum powder were recovered from Mubin’s house in Ukkadam. On October 27, the National Investigation Agency (NIA) registered the case.

Mubin had previously been questioned by NIA in 2019 for suspected links with radical elements, and has been registered as the primary accused in current case.

Significantly, October 26 reports cite an unnamed officer stating that Mubin and the other arrested men were in contact with Mohammad Azharuddin from Ukkadam, who is currently in jail in connection with the 2019 Easter Sunday bombings in Sri Lanka, perpetrated by affiliates of the Islamic State (IS).

Azharuddin was a close aide of Moulavi Zahran Hashim, the radical Islamist Imam and preacher who was the mastermind behind the Easter Sunday attacks, and carried out the suicide bombing at the Shangri-La Hotel in Colombo.

Meanwhile, it also came into light that one of the arrested, Muhammad Talka was the nephew of Syed Ahmad Basha, ‘chief’ of the banned terrorist organisation Al Ummah, who was involved in the 1998 Coimbatore bomb blasts. Al Ummah was founded by Basha in Coimbatore, Tamil Nadu, in 1993, a year after the Babri Masjid demolition. It came under the spotlight after the 1993 bomb blast near the Rashtriya Swayamsevak Sangh (RSS) office in Chennai, in which 11 persons were killed. Basha and others were arrested under the Terrorist and Disruptive Activities (Prevention) Act, but were released in 1997. In 1998, Al Ummah planned serial bomb blasts at multiple locations in Coimbatore, in which 58 persons were killed. The group was banned by the Government of Tamil Nadu after these blasts.

In the context of the security situation in India, outside Jammu and Kashmir, it is certainly the case that Islamist terrorism related incidents and fatalities have declined dramatically since their peak in 2008, when 362 persons were killed in such attacks. Nevertheless, Islamic State ‘inspired’ activities have resulted in a number of incidents of violence. The first of these was the Bhopal–Ujjain Passenger train bombing of March 7, 2017, in which 10 people were injured. Moreover, according to South Asia Terrorism Portal, 18 people (two civilians, four Security Forces personnel and 12 militants) have been killed in 13 incidents involving or inspired by IS, across the country, including Jammu & Kashmir (till October 30, 2022).

Crucially, the global contribution of Indian origin militants to IS is microscopic. In a country with a population of 1.417 billion, including over 200 million Muslims, just 111 travelled to Syria, Iraq and Afghanistan to join IS, of which 44 confirmed killed. Of these, 50 of the Indians went from the Diaspora in West Asia, and 40 per cent from India’s Coastal regions.

Nevertheless, Islamist radicalisation continues to find spaces on the fringes of the community. Jameza Mubin, for instance, attended bayan classes at a mosque in Coimbatore, run by the Tamil Nadu Thowheeth Jamath (TNTJ).

The malignancy of radicalization is also visible in the recent countrywide arrests of Popular Front of India (PFI) cadres. September 28 media reports indicate that more than 250 people linked to the group were arrested during raids on 22 September and 27 September. PFI was eventually proscribed for five years, on September 27, 2022 under a notification issued by the Union Ministry of Home Affairs (UMHA). According to Ministry of Home Affairs Notification, the Centre exercised its powers under sub-section (1) of section 3 of the Unlawful Activities (Prevention) Act, 1967, proscribing PFI as an ‘unlawful association’.

Formed in 2006 by three south Indian Muslim fundamentalist outfits, namely the National Development Front/NDF, Kerala; the Karnataka Forum for Dignity/KFD, Karnataka; and the Manitha Neethi Pasarai/MNP, Tamil Nadu, the ‘South India Council’ (a Bangalore based organisation floated by NDF in 2004) was rechristened the ‘Popular Front of India’.

The PFI describes itself "as a non-governmental social organisation whose stated objective is to work for the poor and disadvantaged people in the country and to oppose oppression and exploitation." The front organisations through which the PFI carried out its radical activities include the Social Democratic Party of India (SDPI), Campus Front of India (CFI), National Women’s Front (NWF), Rehab India Foundation (RIF), and the Empower India Foundation (EIF). With a countrywide network, the PFI has emerged as arguably one of the most well-organised radical outfits.

Examining the radical outlook and activities of PFI, a dossier by Intelligence Agencies titled “PFI – A Threat to National Security” highlighted the presence of PFI in 17 States. The dossier stated that PFI had been engaged in disturbing the communal and secular fabric of the country and posed a grave threat to the national security, advancing its radical ideology that calls for the establishment of an Islamic state in India. Furthermore, the dossier indicated that, in their oath of allegiance, PFI cadres swear to sacrifice themselves for the creation of Allah’s rule (Shariah) and for the interests of the organisation. This oath was administered only when the cadre was judged suitably radicalised for inclusion in the core group. PFI recruits were exposed to selective video clippings on emotive issues such as the Babri Masjid demolition, communal riots in Gujarat and other parts of the country, instilling a sense of ‘Muslim persecution’ and distrust against the State as well as other communities.

India also faces the problem of ‘lone wolf’ terrorist incidents associated with the misuse and abuse of the electronic and social media. Due to easy access to the internet, extremist ideologies propagated by global terror outfits and radical organisations are readily available for mass consumption. Ghaus Mohammad, one of the prime accused in the July 28, Udaipur beheading case, for instance, was closely connected with the Karachi-based extremist Dawat-e-Islami. According to an un-named NIA official, in addition of visiting Karachi, Ghaus had been in touch with several Pakistani numbers over social media platforms, including WhatsApp, Skype, Facebook messenger and Snapchat. Communal tensions and violence are also exploited for ‘online preaching’ of radical ideas by various groups. Taking advantage of the communal tensions, especially during the Delhi riots of February, 2020, IS released the first issue of its India-specific online publication, Sawt al Hind (Voice of Hind). In some of its editions, it spoke about attacks on Indian security forces, revenge for the northeast Delhi riots, and how to use the Covid-19 pandemic to attack India while it was at its weakest.

Also, on October 29, in his keynote address at a special meeting of the UN Security Council’s Counter-Terrorism Committee (CTC), India’s Foreign Minister S. Jaishankar stated that terrorist groups, their “ideological fellow-travelers” and “lone wolf” attackers, had enhanced their capabilities by gaining access to new and emerging technologies. The transformative technological innovations and breakthroughs of the past two decades, including virtual private networks, encrypted messaging services, blockchain and virtual currencies, have an array of economic and social benefits; but the flip side of progress is their misuse by terrorists, he added.

Radicalization is also receiving a fillip as a result of the growing rift between various communities in the country, with an increase in the incidence of riots and disruption.

The recent Hijab row case in Karnataka, the statement of former BJP spokesperson, Nupur Sharma on Prophet Mohammad, and the proliferation of a communally polarizing politics across the country is creating fertile ground for various terrorist and radical organisations to mobilize people alienated by these trends, and to recruit cadres, especially among the youth.

Terrorist violence in India has certainly reduced dramatically, but the social fabric of the country is being pulled apart. Unless these trends to communal polarization and radicalization are checked, national security will be increasingly jeopardized.