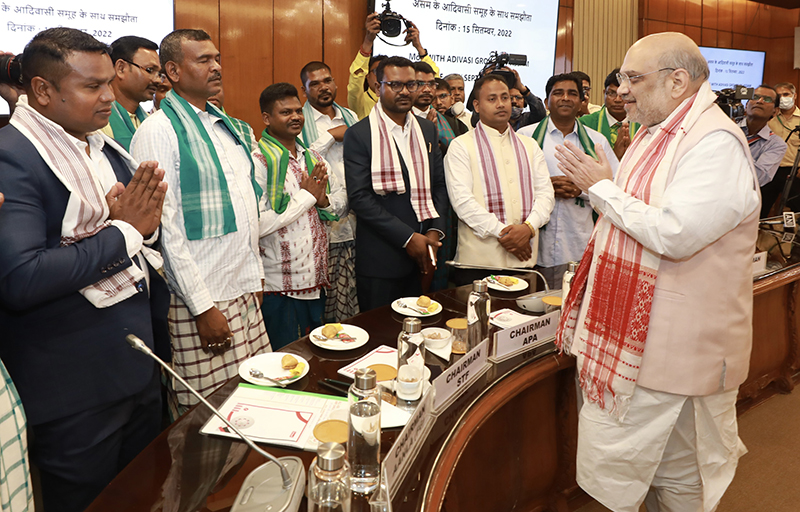 On September 15, 2022, a tripartite agreement was signed between the Union Government, Assam Government and representatives of eight Adivasi groups.

According to the Union Ministry of Home Affairs (UMHA), the groups agreed to:

UMHA also shared the major provisions of the agreement which included:

A special development package of INR 10 billion, to be provided over a period of five years, for infrastructure development in Adivasi populated villages/areas.

Significantly, the Government of India has signed several agreements over the past three years to end extremism and bring lasting peace to the northeastern states. The principal agreements include:

An agreement was signed with the Sabir Kumar Debbarma faction of the National Liberation Front of Tripura in August 2019, resulting in the surrender of 88 cadres with 44 weapons.

An agreement was signed on January 16, 2020, to resolve the 23-year-old Bru-Reang refugee crisis. The agreement would ensure that 37,000 internally displaced persons are permanently settled in Tripura.

To resolve the five-decade-old Bodo issue in Assam, the Bodo Accord was signed on January 27, 2020, resulting in the surrender of 1,615 cadres, with a huge cache of arms and ammunition, at Guwahati on January 30, 2020.
To resolve the long-running dispute in the Karbi regions of Assam, the Karbi Anglong Agreement  was signed on September 4, 2021, and more than 1,000 armed cadres renounced violence and joined the mainstream of society.

An agreement was signed on March 29, 2022, to settle the dispute over six areas out of a total of twelve, where an interstate boundary dispute between the states of Assam and Meghalaya existed.

Indeed, Union Home Minister Amit Shah, while speaking on the occasion of the signing of the latest agreement, declared that the Central Government had “decided that, before 2024, all border disputes between the North Eastern states and all disputes related to armed groups will be resolved.” He boasted, that “this [Adivasi] agreement will prove to be another important milestone in the direction of making North-East extremism-free by 2025.”

However, while being positive, the Government, needs to remain cautious about the success of these agreements, as each of them has its own lacunae. Many past agreements have created opportunities for new groups to emerge and carry forward existing or new ‘struggles’.

The issue of a separate State of Bodoland and Autonomous State in the Hill District, which was supposed to have been finally addressed by the Bodo and Karbi Accords, for instance, still exists. While the Government signed agreements with knowns groups and these came into the mainstream, a new group emerged. The Bodo National Students’ Union (BoNSU) formed in February 2022, is now renewing the demand for a separate State of Bodoland. BoNSU president Bonjit Manjil Basumatary claimed, “Only the creation of a separate Bodoland State will fulfil the dreams of the Bodo people. The indigenous people are becoming guests in their own backyard due to the failure of government to protect their lands.”

It is pertinent to recall, here, that the main demand of the Adivasi groups for Schedule Tribe (ST) status has only promised to be expedited, and has not been expressively granted in the latest agreement. Understandably, caution has been exercised in conceding the demand, as any imbalance will raise complications for the Government, as the existing communities within the ST list have repeatedly raised objections on the grounds that it would result in a dilution of benefits currently accruing to them. Besides, groups like the Chutiya, Matak, Moran, Koch Rajbongshi and Tai Ahom are also demanding ST status. Further, the State Government has also spoken about the possibility of conferring ST status on the Karbi people living outside the Karbi Anglong Autonomous Council areas. Each of these proposals and demands invites strong opposition for other groups.

As the ST status issue remain unaddressed, the success of the latest agreement remains uncertain. Indeed, Prem Hasda, the Working President of the Adivasi National Convention Committee, an umbrella organization of some 14 Adivasi bodies, noted,

It's surprising that the [Assam] chief minister has announced about the agreement without consulting with the stakeholders. Currently the discussion was only happening with the ceasefire groups and the civil society groups were kept out of it. But if the demand of ST status to the community is withdrawn from the agreement like reported, the entire peace process will be futile. It will not solve any issue of the community.

Further, the MoU signed (parts of which are available on the Facebook page, Digital Bodoland) promises to ‘expediate’ (without any deadline) the process of scheduling Adivasi inclusion in the ST list by a Committee of a Group of Ministers of Assam (CGoM) which is looking into this aspect. The CGOM was formed on January 8, 2019, after the Constitution (Scheduled Tribes) Order (Amendment) Bill, 2019, was introduced in the Rajya Sabha (the Upper House of India’s Parliament) to include certain Communities in the list of the Scheduled Tribes in relation to the State of Assam. The bill had named 36 Adivasi communities besides the Chutiya, Matak, Moran, Koch Rajbangsi and Tai Ahom for inclusion in the existing schedule. The MoU (parts of which are available in Facebook page Digital Bodoland) also says that process to include another 21 Adivasi communities to the list will be forwarded to CGoM.

Clearly, the successful conclusion of these agreements creates majors challenge that will require careful handling within an inclusive approach. The exclusion of any group will create new wedges between the protected class those that remain ‘non-protected’, potentially fueling renewed violence in the region.