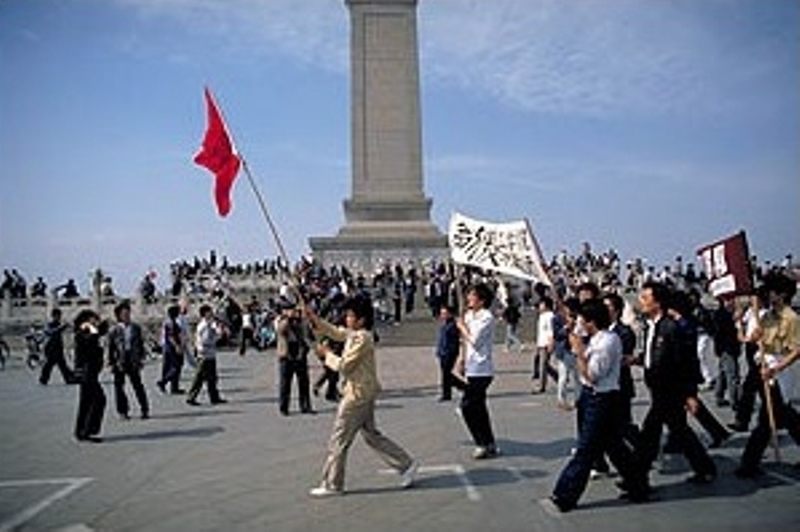 The genocide at the Tiananmen Square in 1989 is still a banned subject in China.

The Beijing government has taken every possible step to block its discussion, commemoration or remembrance. However, it could not manage to erase the truth of the tragedy.

The brutal killing of hundreds of youngsters continues to intrigue and haunt people in China as well as the global population. It is becoming harder and harder for Beijing to wipe the uncomfortable truth from the public memory.

Thousands of peaceful protestors were gunned down by the communist party-led government at the iconic Tiananmen Square, where once Mao Zedong proclaimed the People’s Republic of China.

The Tiananmen killings became the epitome of government barbarity in the modern world.

Now, whenever human casualties occur on a large-scale as a result of autocratic actions, the horrific memories of Tiananmen massacre are recalled.

The latest being the Ukraine invasion. US President Joe Biden invoked the Tiananmen Square massacre to picture the severity of the destruction in Ukraine.

Beijing has tried to clear every visible mention of the Tiananmen Square massacre, in which thousands of peaceful pro-democracy protesters were killed by Chinese soldiers.

Hong Kong used to be the only place where mass remembrance of Tiananmen was still tolerated.

However, the pro-Beijing government that came to Hong Kong removed the 13-feet artwork called ‘The Pillar of Shame’ in December 2021.

A Danish sculptor Jens Galschiøt made it depicting a mass of deformed bodies in the aftermath of the Tiananmen tragedy. It was erected at Hong Kong’s oldest university, where it remained for over 20 years.

Similar artworks in a few more Hong Kong universities were taken down by Chinese authorities.

“They really want to destroy everything about a story that China doesn’t want people to know about,” Galschiøt said.

The removal of ‘The Pillar of Shame’ has rather made the Tiananmen Square massacre more visible now. The issues were reported in major news portals around the world.

Now Galschiøt is getting frequent calls for replicas of ‘The Pillar of Shame’. One replica has been installed near the Chinese Fudan University campus in Budapest.

"Many people ask for a copy of that sculpture now,” Galschiøt said.

In 2019, Taiwan kept an artwork on display to commemorate the 30th anniversary of the 1989 Tiananmen Square crackdown. It depicted the famous ‘Tank Man’.

“Rather, they blocked the information and distorted the truth about it and tried to conceal the crime,” it said.

After taking over the Hong Kong administration using the controversial national security law, Beijing shut down a Hong Kong museum that commemorated victims of the Tiananmen genocide.

Police raided the museum and took away exhibits and rare artefacts, which included the bullets fired during the crackdown, eyeglasses and shirts worn by the victims, and banners used during the 1989 protest.

Even the candlelight vigil that was conducted annually was forcefully suspended by the Chinese authorities.

All this pained the pro-democracy activists and victims of the Tiananmen crackdown. But they found a way to keep the flame alive.

The Hong Kong Alliance in Support of Patriotic Democratic Movements of China launched a virtual museum through crowd funding.

Leung Kam-wai, the spokesman for the alliance said, “Hongkongers and the Chinese diasporas over the past years have kept the memories of the 1989 movement in Beijing at heart. We hope this piece of history can be passed on to the next generation with the help of the online museum.”

Wang Dan, a prominent student leader of the 1989 movement, said a museum will be built in the US, which will be the replica of that one in Hong Kong.

“We believe that no matter how you view and evaluate that period of history, every citizen should at least have the right to know about it,” he said.

China has been using various tools to ensure people do not get access to the information related to the Tiananmen incident.

However, people managed to find a solution. Chinese people used VPNs and other cyber hacks. Even during the 1989 crackdown, information was sent to the mainland from Hong Kong through fax machines.

Chinese students who go abroad to study, search for the Tiananmen tragedy.

China’s every effort to censor the remembrance of the 1989 tragedy has backfired. Rather it has evoked more curiosity.