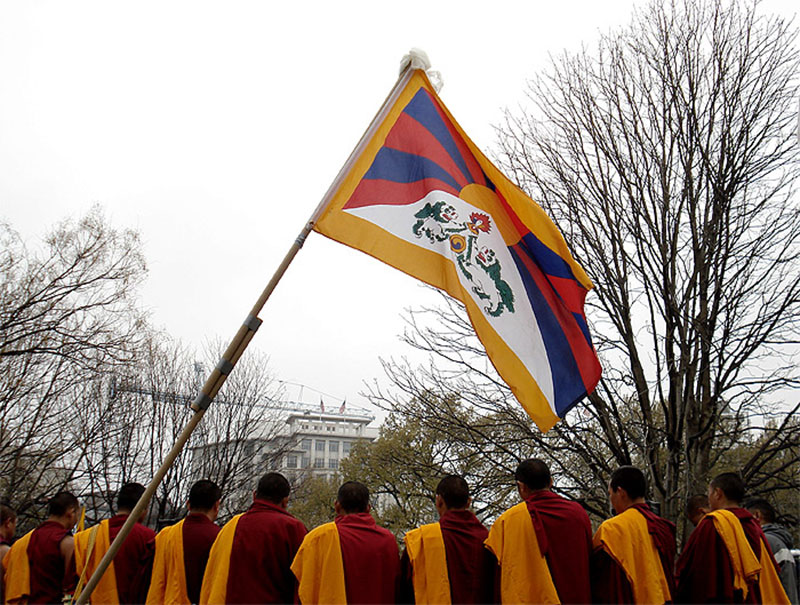 Human Rights Violation continues to take place in Tibet despite CCP’s promise to improve it on many occasions.

Infringements on religion practice are visible from the recent demolitions of Buddha and Padmasambhava Statues in Dargo County.

Their absurd claims of selecting the next Dalia Lama are also a direct attack on Tibetan Buddhist practice and teaching.

Detaining people from sharing the demolition videos and anything related to it to the outside world talks a lot about how guilty they feel in terms of violating Tibetans from practicing their religion.

Chinese authorities have also put restrictions on usage of the Tibetan Language all over Tibet.

Socially, Tibetans inside Tibet constantly face injustices in terms of getting jobs.

The exams for civil services being only conducted in Chinese deprives a section of Tibetans who are more comfortable in their own language and can excel in Tibetan.

With all these injustices and violations of basic human rights in Tibet sickens Tibetan People.

That is why Tsewang Norbu, who is only 25 years old and a successful contemporary artist, set himself on fire. He found no meaning in the fame he has been getting as a singer, because deep down he knows his people are not free and happy under Chinese rule.

Chinese authority posed heavy restrictions on communication into and out of Tibetan areas, with particularly harsh treatment for those who associate with Tibetan living in India as a refuge.

Beijing’s relentless attacks on Tibetan identity including Tibetan language and religious expression has alerted the outside world.

Internationally few major nations, NGOs, Individuals have extended their support for the Tibetans through words, sanctions and monetary aids.

This help is indeed a big thing for the Tibetans, but if they really sympathize with Tibetans and want to hold China accountable, they should pursue their other allies to join in condemning China and put bigger sanctions that could affect them completely.

If they do so, they are not only helping Tibetans but also globally to those who suffer or will suffer a similar fate as Tibet.

As per Freedom House Report, yet again Tibet came off as the second least free country after Syria, South Sudan.

They used covid- pandemic among other reasons to stop people from accessing Buddhist temples and monasteries.

Officials also imposed oppressive ideological controls and political indoctrination within temples and monasteries, and put-up internal video surveillance at such sites with some supervisors and informants.

Recently, as per a media report, the Chinese government has increased their restriction on the Tibetan Language on various online platforms and video streaming services.

It is further reported that the Chinese government ordered in December last year that from 1st March that foreign organizations or individuals can’t share online religious content videos in China or Tibet without proper license.

According to the source, the restrictions are put in a wide range of social media platforms in Tibetan areas.

“Specifically, those platforms where users go live to perform and communicate with their audiences have seen more restrictions put in place. Tibetans are forbidden to speak in Tibetan while communicating, and if any Tibetan artist tries to represent Tibetan culture and tradition on their social media platform, their accounts are disconnected,” the source told RFA, adding that such live performances are interrupted immediately by the government, according to Phayul.

Recently, Tibetan Centre for Human Rights and Democracy reports that, Kunchok Tsepal, 52, a prominent Tibetan writer, teacher and environmentalist who was sentenced to 15 years in 2009 by the Chinese authorities was released on March 18 after serving 13 years in prison.

According to the report, Kunchok spent 13 years of prison sentence in two different prisons.

His imprisonment terms were shortened for two years after saving the life of a fellow prisoner. However, details about his wellbeing and health are currently not available yet while in prison, it was reported that he had problems with waist and knee.

He was arrested on February 26, 2009 after Chinese officials raided his house and his computer, camera and mobile phone were seized. For about nine months there was no information as to his whereabouts.

On November 12 of the same year, he was charged for “leaking state secrets” and sentenced to “15 years of imprisonment in a closed-door proceeding by the Kanlho Intermediate People’s Court,” said the report.

Basically, Tibetans under Chinese rule don’t get to enjoy their rights.

If they ever raise a question or a plea against their police, the concerned person would be labelled as a separatist and would suffer unreasonable imprisonment terms.

There are also reports of people who went missing and not heard of them after they pass comments that go against the wills of Chinese authorities.