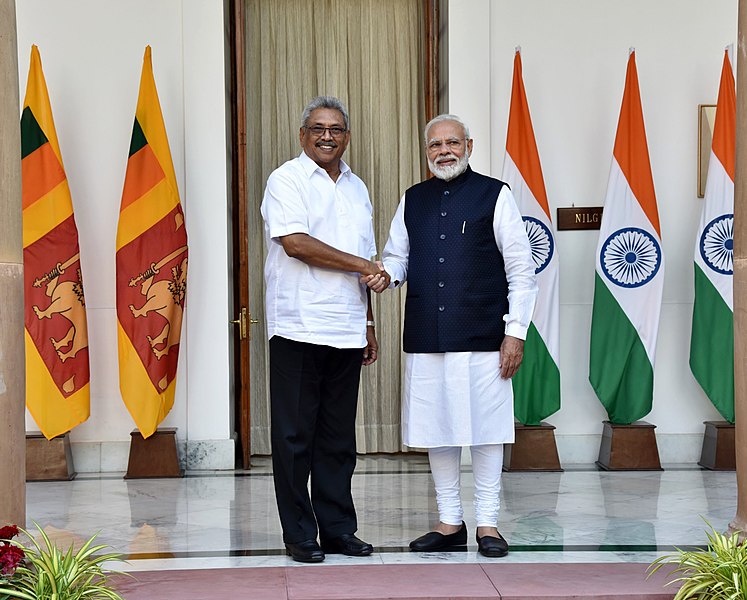 As Sri Lanka's economic crisis deepened, political instability erupted in the form of large-scale protests. Sri Lankans were irked by the government's mismanagement of financial affairs, corruption and bad judgment on initiatives that backfired, leaving the country impoverished - mostly in terms of lacking foreign exchange reserves.

The situation has also rendered the Sri Lankan government unable to import paper for the printing of exam papers, and the print media is already feeling the strain of a paucity of paper for printing newspapers, with prominent newspapers issuing slim editions these days.

The people experienced 'artificial' interruptions in daily life on a scale never seen before in Sri Lanka's history. Rising living prices, petrol, gasoline, and commodity shortages, and a lengthy power outage that began in January 2022 perplexed the world.

In this context, India has rushed to assist the island nation, while China has been pressing for a Free Trade Agreement thus stopping their funding spree, allowing Sri Lankan leaders to approach India for all of their needs, including loans and other items such as rice, fertilizer, maritime security equipment, train engines, and aide for Northern fishermen families.

The year 2022 can be defined as the year  for India to rethink its role in Sri Lanka while also becoming a stronger and more mutually beneficial partner. Previously, India had its own political interests in Sri Lanka and had even earned the fury of the island nation, but that is no longer the case.

After China's entry into the South Asian region through the Hambantota Port Project, India had to reconsider its regional power strategy and to keep China at bay – both as a geostrategic adversary and as a source of border disputes.

Apart from assistance during the pandemic and fertilizer chaos, in which India delivered nano fertilizer to save Sri Lankan farmers, India has offered US$ 500 million in gasoline and a US$ 1 billion loan facility to purchase goods from India due to the current economic crisis.

India recently pledged to donate medicines to Peradeniya Hospital, which was running low on supplies due to the US dollar crisis and purchasing of medicines became impossible.

Prior to issuing the USD 1 billion loan, discussions were held in New Delhi. Indian Prime Minister Modi also met with Finance Minister Basil Rajapaksa, who resigned on April 5, and asked why the India-funded Northern airport in Palaly and the Indian Cultural Centre in Jaffna, which was built with an Indian donation, were not available to the public.

It was claimed that PM Modi told the Minister that if he came to Sri Lanka, he would like to come through Palaly, hence the airport should remain operational.

The Indian government funded the establishment of a high-tech Cultural Center in Jaffna, the Jaffna International Airport, and the Indian High Commissioner in Colombo Baglay recently paid a visit to the Northern fishermen to assess their needs.

The Indian High Commissioner has been too preoccupied with shuttling between Colombo and New Delhi, conveying signals from Sri Lankans to the Indian government, and has pushed India to supply everything to Sri Lanka strategically to keep China at bay.

India nodded and rushed to meet Sri Lanka’s needs without leaving a gap, so that no other country  would grab the opportunity.

On March 18, 2022, India made significant contributions to Sri Lanka's defencesector.Sri Lanka has requested grant assistance for the supply of a 4,000 MT Floating Dock (FD) for the Sri Lanka Navy.

According to India, it goes beyond the current broad range of defence cooperation.

The FD was built in Goa and will be primarily stationed in Trincomalee, while the dock may be moved around at the discretion of the Sri Lankan government with prior notice, except to the Port of Hambantota that is controlled by China.

When the time comes to relocate it, India will examine safety, economics, and the most efficient and effective use of the FD.

There will also be an India-Sri Lanka joint monitoring committee to be set up consisting of members from both Governments of India and Sri Lanka to review progress.

The FD cost US$ 19.81 million and the payment will be made by the Indian Government to the seller in Goa and Sri Lanka is requested to clear it free of charge when it arrives in Colombo.

The Indian government then provides DO-228 Dornier Reconnaissance Aircraft for maritime surveillance.

The Dornier is a multirole light transport aircraft with turboprop twin engines that can take off and land quickly.

It has the capability to conduct maritime surveillance and search and rescue operations in and around Sri Lanka's Exclusive Economic Zone. India said Sri Lanka is not subject to any financial obligations and the cost will be borne by India.

Furthermore, India stated that a US$ 100 million continuing Indian LOC has been completely committed to date for various defense projects, and hence no funding is available under this LOC for the proposed Dornier 228 aircraft procurement.

Furthermore, one Dornier aircraft will be provided as a grant, while another would be delivered through the Indian Credit Line. The Dornier DO-228 has a credit line of US$ 29.46 million, which will be financed in part by an Exim Bank credit facility, according to India.

Then there's the Maritime Rescue Coordination Centre (MRCC), created by Bharat Electronic Ltd India with a US$ 6 million grant.

In fact, the MRCC is manufactured by BEL comprising standard equipment technical publications and spares built to the nomenclature.

Also, an India-Sri Lanka Joint Monitoring Committee will be set up consisting of members from both governments.

Also anMoU between the SushmaSwarajInstitue of Foreign Service, India and the Bandaranaike International Diplomatic Training Institute was signed.

Also the MoU  on implementation of hybrid power projects in the three northern islands after much controversy was signed.

The Indians also approached Sri Lanka to sign an agreement in developing the fisheries harbours of Sri Lanka.

While India and Sri Lanka completed all of these agreements, China traded with Sri Lanka to negotiate a Free Trade Agreement. This was prompted by China's announcement that it is willing to pay USD 2.5 billion to the Sri Lankan government if the FTA is signed, as proposed by China's Ambassador to Sri Lanka, Qi Zhenhong.

While Ambassador Qi stated that China had signed 26 free trade agreements, he also stated that finalizing the planned FTA between Sri Lanka and China would greatly help the local market and products in Sri Lanka.

The Chinese Ambassador also briefed Sri Lanka's Foreign Minister, Prof. Peiris, on a number of humanitarian initiatives organized by the Chinese Embassy in Colombo for Buddhist monks and temples, as well as the distribution of 150 food packs to the poor.

The matter was extensively criticized in the Indian media after it was discovered that Sri Lanka had gone to China for a 2.5 billion dollar loan after obtaining loans from India.

Sri Lanka, on the other hand, will not limit itself to demanding assistance from these two countries, as it recognizes that its adversaries are its closest allies, and they will stand by Sri Lanka no matter what.