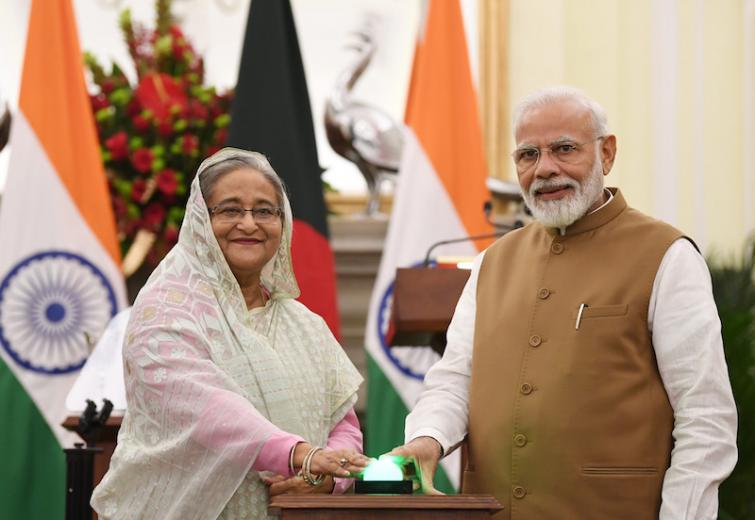 Indian Prime Minister (PM) Narendra Modi is slated to travel to Bangladesh on 26 March for what will be his second visit as PM to the neighbouring country. Modi’s first visit to Dhaka in June 2015 had, by all accounts, been a very successful one. The two countries had signed as many as 22 agreements, and followed that up with the exchange in August 2015 of 162 land enclaves. This addressed a long overdue process of land and population exchanges that had been hanging fire since the 1950s. The 2015 visit had paved the way for closer strategic ties between the two countries. As productive as that visit was, the forthcoming one promises to better it owing to a variety of factors.

To begin with, the occasions and events associated with this visit are highly emotive for Bangladeshis, and this fact alone can be expected to add deeper context, depth and character to Modi’s trip. As India’s Ministry of External Affairs (MEA) announced through a press release earlier this week, “This visit is in connection with the commemoration of three epochal events — Mujib Borsho, birth centenary of Sheikh Mujibur Rahman, 50 years of the establishment of diplomatic ties between India and Bangladesh; and 50 years of Bangladesh’s war of liberation”. Further, PM Modi will be the Guest of Honour at Bangladesh’s National Day programme on March 26.

During the visit, Modi will also hold talks with his Bangladeshi counterpart Sheikh Hasina and call on President Mohammed Abdul Hamid. Officials of both countries have indicated that several agreements would be signed during the visit, and that connectivity is likely to figure as one of the key spheres.

Modi’s participation in events honoring Sheikh Hasina’s father, Sheikh Mujibur Rahman, the architect of Bangladesh’s freedom from Pakistani domination, humiliation and atrocities who is regarded as the founder of the nation by Bangladeshis, and in the commemoration of 50 years of Bangladesh’s war of liberation, to which India’s contribution had been stellar, have raised the profile of the 10-day celebrations in Bangladesh starting on March 17 to another level. Sheikh Mujibur Rahman had declared the erstwhile East Pakistan an independent country, Bangladesh, on March 26, 1971. India had sided with Bangladesh and helped defeat Pakistani forces who eventually surrendered on December 16, 1971.

Although several other regional leaders are also scheduled to grace the celebrations, with Maldivian President Ibrahim Mohamed Solih arriving on a three-day visit on March 17, Sri Lankan PM Mahinda Rajapaksa on a two-day tour on March 19, Nepalese President Bidya Devi Bhandari on a two-day visit from March 22, and Bhutanese Premier Lotay Tshering visiting on 24 & 25 March, it is Modi’s two-day visit that will be accorded the highest priority by the Bangladesh government. Foreign Minister AK Abdul Momen told the media that “This is a very unusual time (due to Covid-19)… but heads of State and government of our neighbouring countries are coming here to show their tribute to our Father of the Nation”. He added, revealingly, that “These are two great events for Bangladesh and we are very lucky that the Indian Prime Minister will join us in this celebration. We are happy that he is coming. It shows the height of diplomatic maturity and achievement. This will be PM Modi's first visit to a foreign country during the Covid-19 period. Other heads of State will only visit Dhaka during their stay, but PM Modi will go to remote parts of the country”. Momen underlined that India and Bangladesh had a “rock-solid relationship” and highlighted the strong social, cultural and historical bonds that bind the people of the two countries. He recalled that during Bangladesh’s independence movement India had come forward to help Bangladeshis “physically, mentally”, and that Indian soldiers had “shed blood” for their cause.

Modi’s visit is also taking place at a time when there is a tremendous groundswell of goodwill for India and its people in Bangladesh on account of New Delhi going the extra mile to make the COVID-19 vaccine available to its eastern neighbour.

During a virtual summit in December last year, Modi had assured Sheikh Hasina that not only would India make vaccines available to Bangladesh as and when India began producing them, but a partnership in vaccine production could also be considered. Sheikh Hasina had declared at this virtual summit that “India is our true friend”.

Living up to his promise, Modi ensured that 2 million doses of the vaccine were gifted for the people of Bangladesh, and another 7 million doses were made available to the Bangladesh government expeditiously on a commercial basis. Further large supplies of the vaccine are due to be shipped in the coming days. These humanitarian gestures have softened even those opposition parties in Bangladesh that have traditionally been critical or suspicious of India.

That is unsurprising, as in these difficult and uncertain times any country would be appreciative of a gift of critically required but hard to source vaccines. For a small, developing nation such as Bangladesh, with its large population and its limited resources, the Indian gesture would have meant so much more.

Foreign Minister Momen had thanked India for gifting the two million vaccine doses and agreeing to provide 30 million more. He had added, “There are still about 130-135 countries in the world that have not got Covid-19 vaccines. But there is a friend India… We have such a rock-solid relationship that we got the vaccines, we should be happy and we are very happy”.

India’s External Affairs Minister (EAM) S. Jaishankar, who on 4 March had visited Dhaka to prepare for Modi’s upcoming visit, had also highlighted India’s Covid-19 assistance to Bangladesh when he said that “This is a difficult time for all of us because of Covid. For us, it was important that we are partnering with you in your health and economic recovery. The largest number of vaccines shipped by India to any foreign country so far — 9 million — has been to Bangladesh”. He further said that his visit should also be seen as a statement of solidarity in “our shared” fight against the COVID-19 pandemic, while adding that “The pandemic has actually provided an opportunity to reaffirm our friendship”.

On what could be expected during Modi’s visit, Jaishankar had said that the significance of India’s ties with Bangladesh lay in Dhaka’s centrality for India’s ‘Neighbourhood First’ policy and its growing relevance for India’s ‘Act East’ policy. He also said that “Our relationship is so broad & our comfort level so high that there is no domain today that is left untouched.

It is a truly a 360 degree partnership. Our relations actually transcend even our strategic partnership, and I believe that our bonding is central to the realisation of a dream of a peaceful, prosperous and progressive South Asia”. Jaishankar added that “We see Bangladesh as a key neighbour and a valued partner not only in South Asia but also in the broader Indo-Pacific region. Every outcome and achievement in our relationship resonates through this region. It is no secret that we cite it to others as an example for emulation. We are working so hard to expand our relationship to whole dimensions, ranging from security, trade, transport and connectivity, culture, people to people ties ensuring development of our shared resources. Our comfort levels are now so high that we have shown that there is no issue that we cannot discuss and resolve through amicable dialogue”. In such an atmosphere, Jaishankar emphasized, PM Modi’s visit would undoubtedly be a “very memorable one”.

A range of issues are likely to be discussed during the scheduled meeting between Sheikh Hasina and Modi, and a number of agreements signed. Connectivity is an area that can be expected to receive considerable attention, judging from Jaishankar’s revelation that a “large part” of his discussions had been about connectivity and that Sheikh Hasina had told him that “in connectivity lies productivity”. Jaishankar added, “If we can build proper connectivity between Bangladesh and India, the entire geo-economics of the region will change. The Bay of Bengal is very effective in this regard. Both sides believe this is possible”.

Among the connectivity projects under consideration by the two countries are the India-Bangladesh-Myanmar-Thailand and beyond road belt. Construction of bridges between India and Bangladesh and road connectivity that would extend further to Nepal and Bhutan has also been under discussion. Expanding upon the train service between Haldibari in India and Chilahati in Bangladesh that was revived after 55 years and flagged off by Sheikh Hasina and Modi at their virtual summit last year, Bangladeshi officials have been quoted in the media as saying that the two leaders were likely to flag off a direct passenger train service between Dhaka and New Jalpaiguri in the Indian state of West Bengal.

The Teesta water sharing agreement could also figure during the talks. The importance of the assured share of the Teesta river’s water that the agreement seeks to allocate to Bangladesh has not diminished for Dhaka. This is evident from the fact that the issue had been brought up both during the December 2020 virtual summit and during Jaishankar’s visit earlier this month. Foreign Minister Momen had said after his meeting with the Indian EAM that both countries stood by the 2011 Teesta agreement that was eventually not signed “due to some local problems”. Momen added that Jaishankar had suggested that they keep their “fingers crossed” on this matter. The EAM while making this remark probably had in mind the elections in West Bengal which are due later this month.

Veering from the norm, Modi is slated to venture out of Dhaka to places of high symbolic value. On 27 March he will visit the famous Jeshoreshwari Kali temple in Satkhira and offer prayers at the Matua temple of Orakandi. The Matuas are a sect of Hindu Vaishnavite Bengalis originating in present day Bangladesh who migrated to West Bengal after 1947. These refugees form a small but influential cohort of about 30 million voters in West Bengal. With the legislative elections in West Bengal, in which Modi’s party is engaged in a tense, high octane battle with the dominant regional party of the state, scheduled to commence on 27 March, a section of commentators have related Modi’s visit to Orakandi to the elections next door. While their contention may indeed have a grain of truth, it nevertheless dismisses another extremely pertinent aspect. The confidence and reassurance that the minority Hindu community in Bangladesh, which has faced rough times especially during periods when the Bangladesh Nationalist Party (BNP) and Jamaat-e-Islami (JEI) have been in power, will take from Modi’s temple visits has not been amplified enough.

All things considered, Modi’s visit to Bangladesh is shaping up to be a multi-faceted one, the success of which will be driven by a warm and welcoming atmosphere in the host country combined with a potent mix of deliverables and symbolisms.

Glimpse of PM Modi reviewing artifacts and antiquities which he is bringing back to India from US 01 Jan 1970, 05:30 am