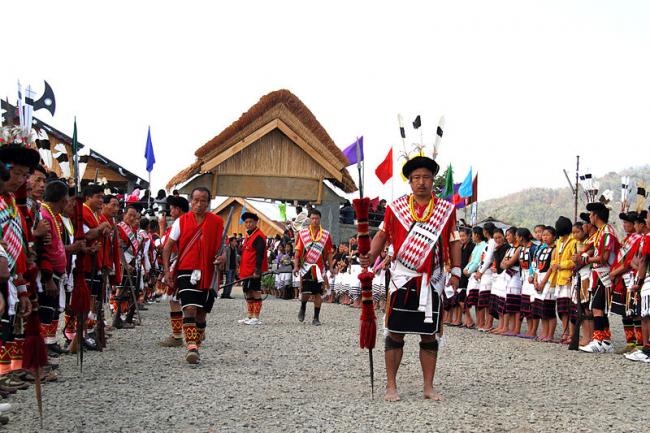 Nijeesh N. Research Assistant, Institute for Conflict Management | | 29 Aug 2016, 04:30 pm
#Naga Peace Accord: Persistent Ambiguity
Though over a year has passed since the signing of the 'historic Naga peace accord' or the 'framework agreement' (as it was later termed) between the Government of India (GoI) and the Isak-Muivah faction of National Socialist Council of Nagaland (NSCN-IM), the 'framework' has not been finalised yet, by either party. The 'framework agreement' was signed on August 3, 2015, by the GoI interlocutor for Naga talks R.N. Ravi and 'general secretary' of the NSCN-IM Thuingaleng Muivah in the presence of the Prime Minister Narendra Modi and others in New Delhi, after nearly 18 years and over 80 rounds of negotiations under ceasefire. Though most of the actual contents of the 'agreement' was not made public, GoI had affirmed that the 'framework agreement' was not a final settlement, and details would be disclosed in the succeeding six months. Regrettably, this remains a distant dream.

Meanwhile, the ailing Isak Chisi Swu, Chairman of NSCN-IM, died of multiple organ failure at a hospital in Delhi, on June 28, 2016. Swu's ill health was widely speculated to be the prime motivator of the hastily drafted 'historic peace accord' of August 2015.

After a prolonged silence, on August 12, 2016, the Government interlocutor R.N. Ravi and NSCN-IM 'general secretary' Thuingaleng Muivah issued a joint statement, declaring, "We assure the people that the talks have been progressing in right direction with determination. We are closer than ever before to the final settlement and hope to conclude it sooner than later." Further, on August 16, 2016, Nagaland Governor P.B. Acharya, in his Independence Day (August 15) message stated, "The ongoing talks have become more purposeful, less ritualistic, more forthright and far more frequent. This will usher in a new, happy era for all Nagas."

Taking into account the complexity of the 'Naga problem', the Narendra Modi Government has projected this accord as the first concrete fruition of the peace process in the insurgency-wracked northeastern region. According to reports, NSCN-IM leaders led by Muivah have been holding meetings with R.N. Ravi at least two to three times a week to push for a final settlement. However, GoI remained tight lipped on the content of Framework Agreement conceding only that, "the framework agreement lays down broad principle within which final agreement will be worked out and consultation with all stakeholders including State Governments of Nagaland, Assam, Meghalaya and Manipur will be held before reaching a final agreement".

While, ambiguity surrounding the 'hidden contents' of the 'framework agreement' persists, some developments give an indication of the course of the talks. As a positive gesture GoI ensured the release of the NSCN-IM's 'major general' Ningkhan Shimray aka Anthony from the jail. On August 2, 2016, Ningkhan Shimray was granted bail by a special court in New Delhi, after the National Investigation Agency (NIA) did not oppose his bail application, stating that that his bail was "important in the interest of peace negotiations between NSCN-IM and the Government of India". A Press Note from NSCN-IM's 'Ministry of Information & Publicity' noted that the "maturity and sincerity displayed by GoI at this crucial stage of talk with this change of attitude will definitely go a long way in forging better relationship and mutual trust between the two entities." NSCN-IM strongly urged the GoI to drop all charges against Shimray and to release him unconditionally, so that future legal entanglements do not come in the way of a political solution.

In another move, former Director General of the Border Security Force (BSF) D.K. Pathak was, on August 3, 2016, appointed as the new Chairman of the Ceasefire Monitoring Group (CMG), created in 2001 to oversee the Ceasefire with the Naga militants. This is the first time that a Police officer has been appointed to the post, which has invariably been held by an Army officer in the past. The main task of the CMG Chairman is to help in the creation of a 'conducive atmosphere', by talking to the stakeholders on the ground to pave way for a successful political negotiation and bring a final solution to the decades-old insurgency problem. According to sources, Pathak was chosen for the job given his experience, not only as a BSF officer - the Force tackles insurgency in the North East as part of its mandate to guard the Indo-Bangla border - but also owing to his knowledge of the region, gained over his early years in service as an IPS officer in the Assam cadre, when insurgency there was at its peak.

Although NSCN-IM is still considered as the major Naga militant group in the region, violent incidents in which the outfit is involved have come down drastically as result of the ongoing peace talks. Since the August 3, 2015 Agreement, not a single insurgency-related fatalities has been registered in the name of NSCN-IM in Nagaland. However, according to South Asia Terrorism Portal (SATP) data, two civilians were killed in two different incidents by NSCN-IM militants in Manipur during this period (all data updated till August 28, 2016).

Nevertheless, according to sources, as with any other northeast militant formation, NSCN-IM remains involved in other violent activities, including abduction, extortion and 'tax collection' to sustain their activities, though reported cases are few. In a recent incident, on August 12, 2016, Police arrested two NSCN-IM cadres, identified as Renchamo Khuvung and Ngachanpam Kasar, who were reportedly collecting money from commercial vehicles proceeding to Kohima, from the Wokha District of Nagaland. After reports of the arrests spread, the office of the NSCN-IM 'Wokha Town Command' was ransacked by an irate crowd at Wokha town, demanding the arrest of the 'town commander'.

Earlier, on July 30, 2016, Assam Rifles (AR) identified and neutralized an illegal detention centre run by NSCN-IM in Sitiki Basa village in Dimapur District and rescued two abducted civilians, Raju Choudhary and Nayan Bora. During the operation, six NSCN-IM cadres who were running the illegal detention centre were arrested and many incriminating documents related to kidnapping/extortion were also recovered. Choudhary, State President of an NGO -- ACCIF (Anti Corruption and Crime Investigation Front) - was abducted on May 2, 2016 and his family was asked to pay INR two million for his release. Bora was abducted on June 18, 2016, and a demand of INR 500,000 as ransom was made to his family. The rescued duo stated that they saw around 40 people being beaten up and tortured, who were subsequently released after payment of ransom.

SATP data indicates that at least 29 NSCN-IM militants have been arrested in Nagaland since August 3, 2015, while eight NSCN-IM militants were arrested from Assam and five each from Arunachal Pradesh and Manipur (data till August 28, 2016).

Similar cases of abduction and extortion have been reported in Manipur as well. On the intervening night of July 21-22, 2016, three civilians, identified as S. Lao, A. Adhani and C. Kholi were rescued by a joint team of the Maram Battalion under the Senapati Brigade of the Red Shield Division of the Indian Army and Senapati Police from Shepoumaramth office of NSCN-IM. They had been detained by NSCN-IM in their regional office for almost two months for "non-payment of taxes". Through documents recovered from the office, it has come to light that the outfit was involved in rampant illegal taxation from locals, and anyone who refused to contribute has been beaten, tortured and illegally detained, a Police release claimed. The Security Forces (SFs) also arrested two NSCN-IM members, 'lance corporal' Alen and 'private' John, along with arms. Subsequently, on August 17, 2016, Manipur Naga People's Front (MNPF) alleged that "For the last 20 years 90 per cent of the development works of the Hill areas particularly in the Naga areas (in Manipur) have been spoiled by NSCN-IM,"

Moreover, Phoren Ramwaone, an arrested NSCN-IM militant in Police custody in Assam, disclosed, on August 22, 2016, that Tinsukia town in Assam was being used as a transit route and corridor by NSCN-IM militants from the Hebron headquarters in Dimapur (Nagaland) to the Lohit District of Arunachal Pradesh, for the past several years. He further revealed that it was common practice for the outfit to recruit children from Naga dominated areas of Arunachal Pradesh and to transport them to the Hebron camp for training. These children, at a later stage, were inducted either into the civil or military wing of NSCN-IM. An average of five to six children was picked up from the Lohit and Longding Districts of Arunachal, annually.

One of the major challenges for finalizing a settlement is the drafting of an "inclusive solution" to the 'Naga problem' through a peace accord with a single Naga group. There are several Naga militant factions, as well as political and tribal groups fighting for 'Nagalim' (Greater Nagaland). Moreover, the issue of 'Naga integration' of all Naga dominated areas in neighbouring States has also been a principal demand of NSCN-IM, and faces stiff opposition from these States (Assam, Manipur and Arunachal Pradesh). After violent reactions to the 'extension of the ceasefire without territorial limits' in the region in 2001, GoI had placed this entire issue on the back burner.

Besides, some of the Naga militant factions who are not part of the 'peace accord', especially the Khaplang faction of the National Socialist Council of Nagaland (NSCN-K), are trying to occupy the 'space' purportedly vacated by the NSCN-IM. NSCN-K, unilaterally exited its ceasefire agreement with the GoI on March 27, 2015, and escalated its violent activities in the region.

Further, the spreading speculations about the contents of the agreement have also complicated issues on the ground. Reports asserted that Muivah had claimed that "NSCN-IM had not given up the demand for sovereignty and a separate flag and passport for Nagas was not just a 'demand' but a 'right' as the Nagas were never under Indian rule." This provoked furious criticism from different corners, and allegations that the Centre was "compromising India's sovereignty and integrity" for the accord. However, the Central Government categorically denied the allegation, stating that that the 'issue of sovereignty' for each State is taken care of by India's federal structure. It was also reported that Interlocutor R.N. Ravi, during the talks, had offered that about 5,000 cadres of NSCN-IM would be inducted into BSF as part of their rehabilitation process. The Union Ministry of Home Affairs (UMHA) later dismissed this as false.

Given the current scenario in India's northeast, any persistence of uncertainty can only feed the forces of destabilization. Even if a final settlement is not imminent, greater clarity on the status of the peace process, and on the terms of negotiations currently prevailing, can help contribute to a greater sense of political calm in Nagaland and its neighbouring States. Crucially, whether the present accord eventually works out as a 'Naga accord' or simply as an 'NSCN-IM accord' - as a pattern of piece-meal appeasements that the Nagas have repeatedly rejected over the past several decades - remains to be seen. The outcome will test the political sagacity of both GoI and of the NSCN-IM leadership.