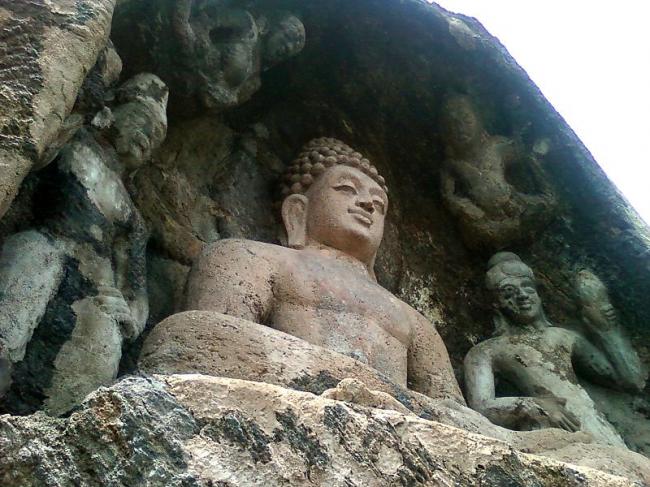 Deepak Kumar Nayak Research Assistant, Institute for Conflict Management | | 16 Aug 2016, 04:03 pm
#Andhra Pradesh, # Maoist, # Creeping Revival
On July 30, 2016, Communist Party of India-Maoist (CPI-Maoist) cadres abducted and killed Vooraka Maraiah (45), a pastor, branding him as a 'Police informer', at Lakshmipuram village under the Nellipaka mandal (administrative unit) of the East Godavari District. Maraiah's body was found with hands tied at the back, bearing stab and bullet wounds, along with a letter in which the Maoists charged him with not heeding to their warning to mend his ways. He "accumulated wealth disproportionately. As Maraiah started exploiting the poor tribal people and the needy, we punished him in the people's court," the letter alleged. The Maoists also warned a host of other village leaders allegedly involved in "unlawful" activities and asked them to cut off their ties with the Police.

Similarly, on March 22, 2016, Maoist cadres killed a civilian, identified as Koothudi Venkata Rao, of Jakaravalasa village at D. Thadivalasa, a hamlet under Kurukuttipanchayat (village level local-self government institution) in the Salur Agency of the Vizianagaram District. He was also killed on allegations of being a 'Police informer'.

In another incident on March 6, 2016, Maoists of the Galikonda 'area committee' killed a tiles trader, identified as Gundu Rao, near Kumkumpudi of G.K. Veedhimandal in the Vishakhapatnam District. After killing the trader by slitting his throat, the Maoists left a note stating that Rao associated himself with the anti-Maoist wing of the District Police and was passing on information about the party. Rao was the husband of former Mandal Parishad Territorial Constituency (MPTC) member Chandrakala of G.K. Veedhi mandal.

Despite these civilian killings, the ground reality remains adverse for the Maoists in Andhra Pradesh, as in other theatres of conflict across the Maoist heartland. Indeed, they face even more challenging times in Chhattisgarh, presently considered the Maoist's last bastion.

According to partial data compiled by the South Asia Terrorism Portal (SATP), at least 10 Maoist-related fatalities (five civilians and five Maoists) were reported from Andhra Pradesh in 2016 (till August 15), while the State recorded five such fatalities, (four civilians and one Maoist), during the corresponding period in 2015.

The highest number of fatalities, 320, including 132 civilians, 21 SF personnel and 167 Naxalites-[Left-Wing Extremists (LWEs)], in then undivided Andhra Pradesh was recorded in 2005. Fatalities in LWE-related violence in the State have registered continuous declines since 2006, with exceptions in 2010, 2013 and 2016, when transient reversals were recorded.

Significantly, the 'Martyrs Week' observed by the CPI-Maoist (July 28 to August 3) passed off without incident in the Visakha Agency, except for the killing of the pastor in East Godavari District. The Maoists had pasted posters and put up banners asking people to observe the week in the Visakha Agency, one of the areas in which the rebels have a considerable presence. There was, consequently, a huge deployment of AP's Greyhounds and Central Reserve Police Force (CRPF), who undertook combing operations all over the rural areas of Visakhapatnam District. A senior Police official in the Visakha agency disclosed, "This year, Maoists did not indulge in any violent or destructive activity during the Martyr's Week. They were aware of the combing parties and kept low." However, the Naxalites had paid tributes to their martyrs at Injari panchayat in Pedabayalu mandal, where 'commander' Kiran aka Manganna inaugurated a commemorative pylon. Some cadres including 'commander' Naveen and 'division committee leader' Kakuri Pandanna, were present at Garimanda village in the Koyyuru mandal.

Andhra Pradesh has recorded one major incident (each involving three or more fatalities) in 2016 (till August 15) in which three Maoists were killed:

May 4, 2016: Three Maoists were killed in an encounter with the Police in Marripakala forests under Visakha Rural Agency area in the Visakhapatnam District. The Maoists were identified as Galikonda area committee 'commander' V.R.L. Gopal aka Azad, Julumuri Chinnaiah aka Anand and Bharati, a woman cadre. Commenting on the incident, Babujee Attada, Additional Superintendent of Police (ASP), Operations, Visakha Rural said that one loaded AK 47 assault rifle, two Self-Loading Rifles (SLRs) and kit bags were recovered from the encounter spot along with dead bodies.

There was no major incident through 2015.

Andhra Pradesh presents a picture of sustained SF consolidation, and the Maoist leadership has acknowledged this in the recent past. On July 20, 2016, in an interview in the Andhra Odisha Border (AOB) region, Maoist 'Central Committee' member Ramachandra Reddy aka Pratap Reddy aka Chalapathi admitted that the Maoist movement had suffered serious setbacks in recent times in the form of encounter deaths and the surrender of leaders. However, he expressed the hope that the 'people's movement' had not been suppressed and would bounce back.

Crucially, Andhra Pradesh has done extraordinarily well against the Maoists over the past decade though it would be naïve to suggest that the threat has been completely eliminated and that the Maoists do not have the ability to make a comeback. Indeed, in their revival efforts in the AOB region, the Maoists have reportedly constituted an Action Team and conducted a 'recce' in the capital area of Amaravati, the newly designated capital of Andhra Pradesh in the month of May 2016. Commenting on this development, a top Police official preferring anonymity disclosed that there had been no underground activities in the capital region, but there was information on the movement of Maoists in Krishna and Guntur Districts: "We have information about the Maoists working with some frontal organisations and some like-minded people in Krishna and Guntur Districts. Some sympathisers are helping naxalites in spreading their network and an alert has been sounded in this regard."

Significantly, on August 3, 2016, the Rajya Sabha (Upper House of India's Parliament) was informed that Naxalism had shown varying trends in Andhra Pradesh during the preceding two years, while it declined in the newly constituted State of Telangana during the same period. In a written reply, Minister of State for Home Affairs Hansraj Gangaram Ahir disclosed,

Telangana was carved out of Andhra Pradesh on June 2, 2014, after which the truncated State of Andhra Pradesh has recorded 26 fatalities, including 14 civilians and 12 LWEs, according to SATP (data till August 15, 2016). Moreover, the Maoist failure to revive their movement in Telangana - which was long their heartland region in undivided Andhra Pradesh - has been a serious jolt to the organization, keeping in mind the fact that the Maoists were active supporters of a separate Telangana State.

Crucially, eight Districts of Andhra Pradesh out of a total of 13, feature among the 106 across the country declared as LWE-affected. The eight include Anantapur, East Godavari, Guntur, Kurnool, Prakasam, Srikakulam, Visakhapatnam and Vizianagaram. The minimum number of LWE-affected Districts in the State was six - East Godavari, Chittoor, Kurnool, Prakasam, Vishakhapatnam and Vizianagaram - in 2015. Most of the violence in the State is, however, reported from Vishakhapatnam District. According to media reports the Agency area of Visakhapatnam District has 11 mandals and the Maoists have a presence in ninemandals.

The Maoists are looking for opportunities to recover lost ground in Andhra Pradesh, as it has long been their 'lifeline'. According to documents seized from Naxals killed in encounters, including data retrieved from the laptop of Maoist leader V.R.L. Gopalaka Azad, who was killed in the Visakhapatnam District on May 4, 2016, the Maoists plan to abduct Government officials, especially Indian Administrative Service (IAS) officers, posted in the Agency areas of Visakhapatnam, Srikakulam and East Godavari Districts. This is a strategy that had succeeded in creating enormous disorders in the past. Clearly, any loss of focus on the part of the Administration and SFs could reopen opportunities that have been shut down through tremendous effort and sacrifice over the past decade of tremendously successful counterinsurgency.