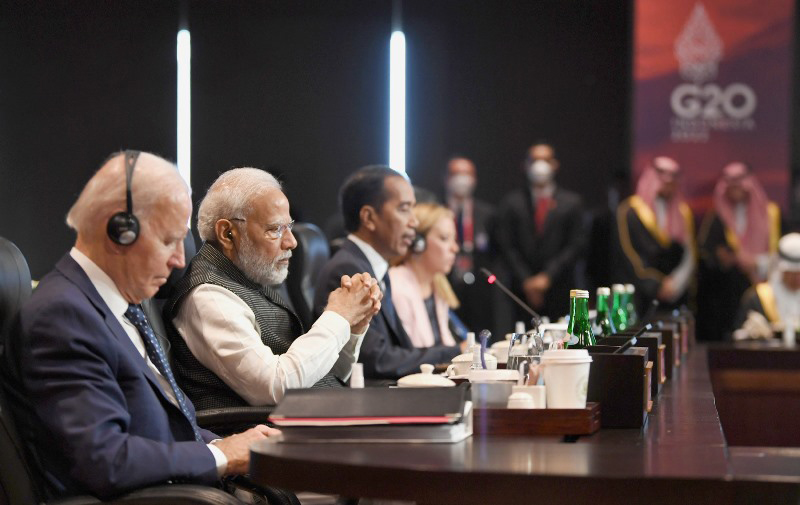 India formally assumed the presidency of G20 on December 1 from Indonesia making it the premier forum for international economic cooperation. G20 is an inter-governmental forum of the world's 20 major developed and developing economies.

Responding to a tweet by US President Joe Biden, the Prime Minister tweeted, "Your valued support will be a source of strength for India’s G-20 Presidency. It is important we all work together to build a better planet."

The US President had written that the US and India will advance sustainable and inclusive growth while tackling shared challenges.

"India is a strong partner of the United States, and I look forward to supporting my friend Prime Minister Modi during India’s G20 presidency.

"Together we will advance sustainable and inclusive growth while tackling shared challenges like the climate, energy, and food crises," Biden said.

"Thank you, my dear friend Emmanuel Macron ! I look forward to consulting you closely during India's G20 Presidency, as we work to focus the world's attention on the issues that affect humanity as a whole," Modi wrote on Twitter.

"One Earth. One Family. One Future. India has taken over the presidency of G20 ! I trust my friend Narendra Modi to bring us together in order to build peace and a more sustainable world," Macron wrote on the microblogging platform.

In response to a congratulatory tweet by Japanese Prime Minister Fumio Kishida, Prime Minister Modi tweeted, "Your solidarity is vital. Japan has contributed a lot to global well-being and I am confident the world will continue to learn from Japan’s successes on various fronts."

"Gratitude for your kind works Mr Pedro Sanchez. Fully endorse your views on collectively working to mitigate challenges of the present to leave a better planet for the coming generations," Modi said in a tweet.

In response to a congratulatory message from the President of the European Council, Charles Michel Modi thanks to his wishes and tweeted, "Thank you Mr Charles Michel. Looking forward to your active participation as we collectively work towards furthering global good."

Earlier, the Prime Minister also penned an article outlining India’s vision for the G20 Presidency. The article was carried by leading publications across the world.