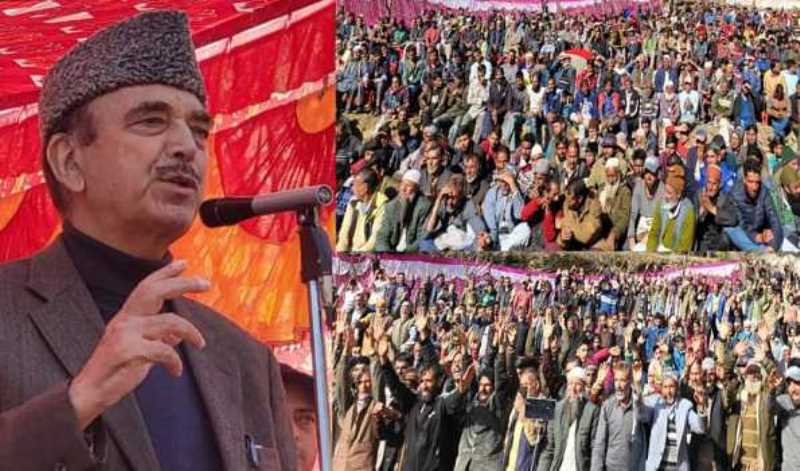 Jammu/UNI: Democratic Azad Party Chairman and former Chief Minister Ghulam Nabi Azad Thursday said that he will continue to fight on the political front to ensure statehood is restored to Jammu and Kashmir and all the rights are taken away on Aug 5, 2019, will be granted back to its people.

“For lasting peace and stability, my party will create diverse employment opportunities for the youths if it gets into power after elections,” he said addressing a public gathering in Udhyanpur belt of Doda district on the last leg of his three-day visit to the erstwhile Doda district.

“As long as employment and economic opportunities are not created, the youth will continue to feel dejected. We have a substantial youth population and we need to tap their energy positively for the growth of the country,” he said.

“We can only engage with the youth when we offer them better employment opportunities since unemployment is a soaring problem in the UT and the present regime has no roadmap available to tackle it,” said Azad.

Azad, however, urged the Union government to fulfil its commitment of restoring the statehood of Jammu and Kashmir besides ensuring the jobs and land is secured for the local populace.

He said his party is committed to stand for the legal and genuine rights of the people of UT.

“Our agenda is pro-people and we will ensure the people of Jammu and Kashmir are empowered with socioeconomic rights,” he said.

During his tour, he met hundreds of people and apprised them of the party agenda.

He assured the people of Chenab Valley that he will not ignore them and the region will emerge as an epicentre of economic activities if his party secures the win in elections whenever they take place.

“We all know that the region was overlooked by successive regimes that had an immense economic crisis with poor job opportunities for the local educated youth. I hail from the region and I know its potential and challenges,” he added.

Azad said that he has a clear vision for the Chenab Valley in which not only fresh economic opportunities will be created but the infrastructure will be developed at par with international standards.

“This region is living in my heart and it is my home. It will emerge as a role model for the whole country if my party comes into power,” he added.