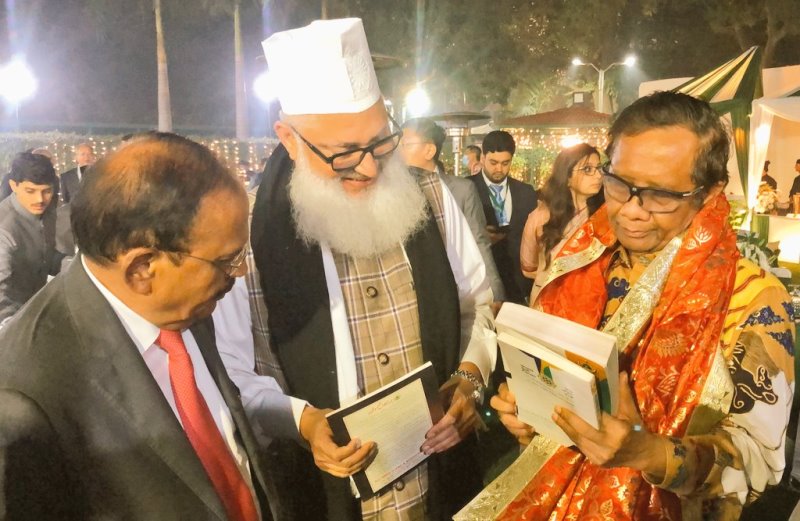 A Peace Summit entitled “Role of Ulema in Fostering a Culture of Interfaith Peace and Social Harmony in India and Indonesia” was held on Tuesday at the India Islamic Culture Centre in New Delhi.

During his speech, Ajit Doval said: There is no space for hate speech in a democracy and “Extremism n terrorism are against the very meaning of Islam because Islam means peace."

Mohammad Mahfud said religion should be a “source of peace, not a reason for discord, conflict or violence” and it should be used as a unifying tool.

Doval introduced AIUMB President and WSF Chairman as a renowned Sufi Cleric of India who spread the message of Peace, Harmony of Sufi Saints in India.

He said “India is the land of Sufi Saint, Spiritual Teachers and Indian Muslims are living in peace and harmony with all faith practitioners across India with the light of Sufi Principals of Love All and Hate None, Serve all with Unconditional love. "

Extremism, Terrorism Against Very Meaning Of Islam": NSA Ajit Doval
"Islam ordains that the most excellent form of Jihad is 'Jihad Afzal' - that is, Jihad against one's senses or ego- and not against innocent civilians," NSA Ajit Doval said.

Doval said the aim of the discussion was to bring together Indian and Indonesian ulemas and scholars to promote “tolerance, harmony and peaceful co-existence”.

He also stressed that civil society needed to develop a shared narrative on de-radicalisation.

He insisted that in a democracy, “there was no place for hate speech, prejudice, propaganda, demonisation, violence, conflict and misuse of religion for narrow ends”.

Top Indonesian minister Mohammed Mahfud MD is in Delhi on the invitation of National Security Advisor Doval. Mahfud, the Coordinating Minister for the Political, Legal, and Security Affairs of Indonesia is accompanied by a high-level delegation of Ulema.

Visiting Ulema from Indonesia also interacted with their Indian counterparts. The discussion was on the 'Role of Ulema in fostering a culture of interfaith peace and social harmony in India and Indonesia'.