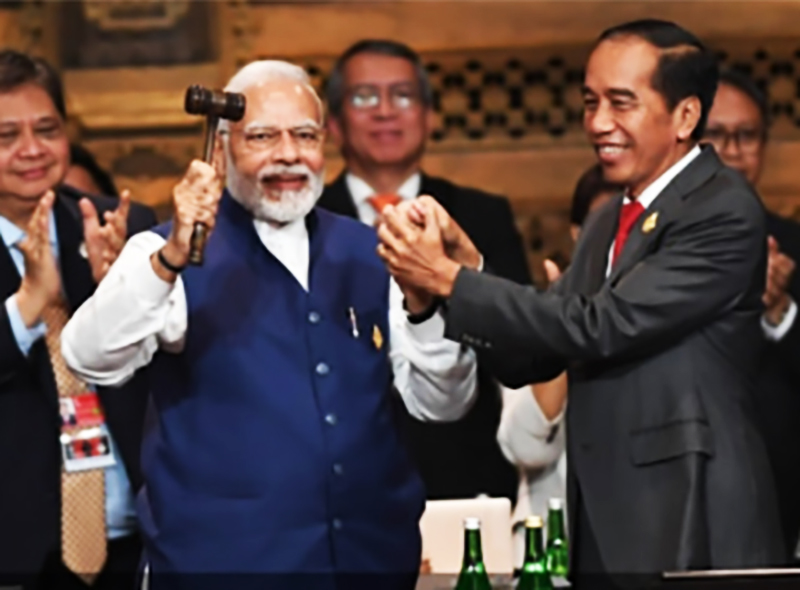 New Delhi/IBNS: Prime Minister Narendra Modi Thursday appealed for a "shift in fundamental mindset to benefit humanity as a whole" as India took over the G-20 presidency.

PM Modi said India’s year-long G20 presidency will be "inclusive, ambitious, decisive, and action-oriented" with a focus on an honest conversation on mitigating threats posed by weapons of mass destruction and enhancing global security.

India began its tenure highlighting counter-terrorism and "unity" exhorting the member countries to join hands in dealing with global challenges, such as economic slowdown and climate crisis.

It also wants to ensure debt sustainability and create disaster and climate-resilient infrastructure.

Over the course of one year, India would hold as many as 200 meetings in various parts of the country; the first one being in Udaipur next month.

India was handed over the presidency of the grouping at the G20 summit in Bali, hosted by Indonesia on November 15 and 16.

External Affairs Minister S Jaishankar said the G20 platform aims to create common ground on key issues among prominent countries. "Our endeavor as the G20 chair is to make that consensus more relevant through wider consultation," he said.

The G20 Summit will be organised in New Delhi in September 2023.

Last week, PM Modi unveiled the theme—"One Earth, One Family, One Future", which depicts India’s commitment to 'Vasudhaiva Kutumbakam' (world is one family).

The logo—a lotus flower and a globe—representing the theme was also unveiled by the PM.

Over 100 monuments across India, including UNESCO world heritage sites, will be lit up highlighting the G20 logo for a week.