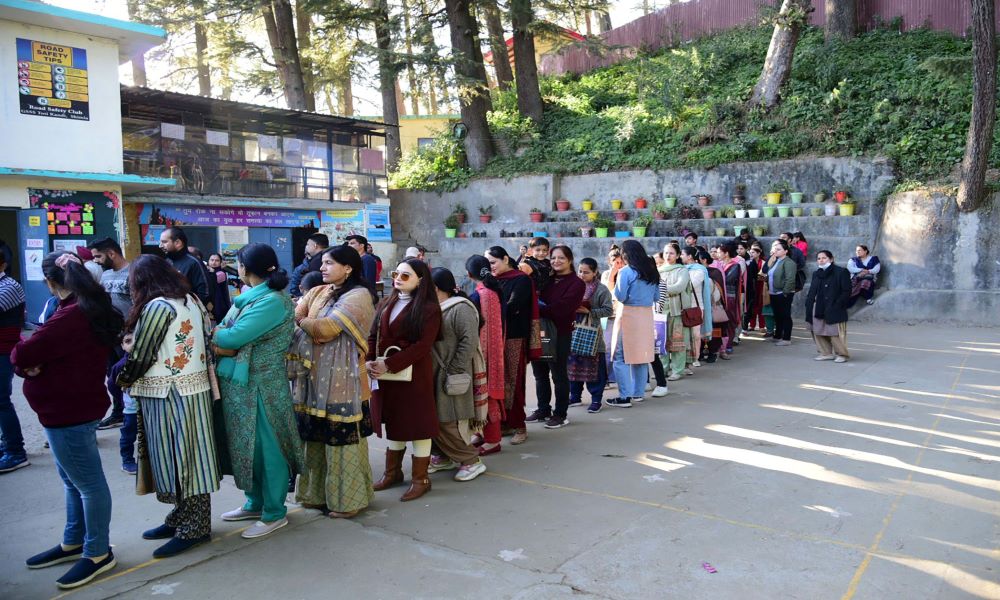 Fate of 412 candidates sealed in EVMs in HP polls

Dharamshala/UNI: Voters across Himachal Pradesh have decided the fate of 412 candidates in polling across 68 constituencies of the state which started at 0800 hrs and concluded in all the 68 assembly seats at 1700 hrs.

Voting began in the morning after poll officials conducted a mock drill at all booths to check EVMs. Voting was scheduled from 0800 hrs to 1700 hrs.

The heavyweights in the fray include Chief Minister Jai Ram Thakur, former CM Virbhadra Singh's son Vikramaditya Singh and a number of ministers and some sitting MLAs.

Till 1700 hrs, 66 percent of polling was recorded, while in some polling booths voting was still in progress. Later, poll officials said altogether a little over 75 percent voter turnout was recorded.

PM Narendra Modi in a tweet had urged voters to turn out in record numbers. Chief minister Jairam Thakur, after casting his vote along with his wife Dr Sadhna Thakur and two daughters, also urged the voters to come out in large numbers to cast their votes and be a part of the festival of democracy.

Voting began at 0800 hrs on a slow note in the hill state but began to pick up as the morning progressed and the winter chill eased a bit.

The Kangra valley was having a sunny day that made people to be in queues at 0700 am one hour before the first vote was cast.

The authorities had also set up its highest booth in Tashigang, Kaza in the Spiti area of Lahaul Spiti district at a height of 15,256 feet that would cater to 52 voters.

In this booth, there was 100 percent polling as all 52 voters cast their vote Saturday.

The voters, polling staff, and party workers sported colourful traditional dress, and food was prepared for the workers there.

For the ruling BJP, Prime Minister Narendra Modi led the campaign from the front, stressing that every vote cast for the BJP symbol will enhance his strength.

The Congress campaign has principally banked on general secretary Priyanka Gandhi Vadra, while AAP's campaign was rather a silent one.

The ruling BJP is hoping for an encore on the back of its development agenda, while the opposition Congress is urging voters to go by the four-decade-old tradition of voting out incumbents.

Arvind Kejriwal's Aam Aadmi Party is also in the fray, with candidates in 67 out of 68 candidates.

The state is facing five major issues which include unemployment, which was 9.2 percent in September and 8.6 percent in October whereas the national average stands at 7.6 percent.

As per the CMIE records, 15 lakh youths are unemployed in the state with 8.77 lakhs registered with the employment exchange.

The issue of the Old Pension scheme (OPS) has left BJP in the lurch. The other three issues of lack of road connectivity in 39 percent of villages, the Agnipath Scheme, and the lingering issues of Apple farmers may affect the prospects of BJP.

Rebels within both BJP and Congress have given them sleepless nights. Now, the fate of all the candidates is sealed in the EVMs with all eyes on the result to be declared on December 8.