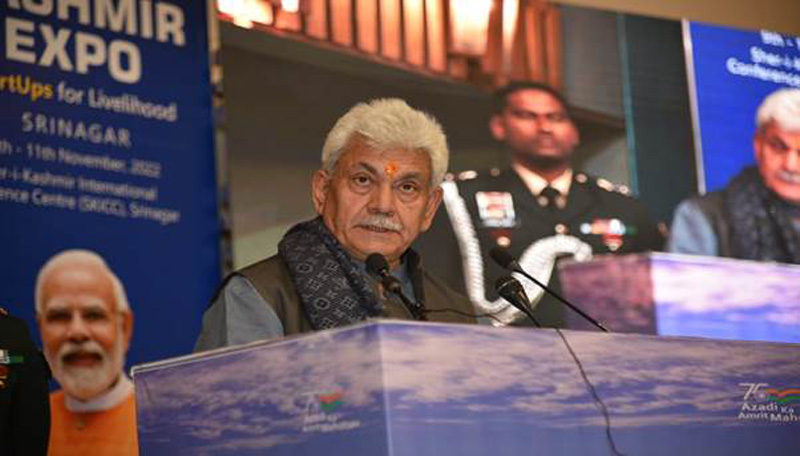 UT has potential of becoming among the topmost because of its young talents: Jammu and Kashmir LG Manoj Sinha

New Delhi: Jammu and Kashmir which at present is among the topmost Union Territories (UT) in startups has the potential of becoming among the topmost in states and Union Territories in the area because of its young talents, said Manoj Sinha, Lieutenant Governor of Jammu and Kashmir at the valedictory session of the three-day Kashmir Expo that ended on Friday.

He emphasized that the ecosystem of innovation has become stronger in the country over the last few years under the leadership of the Prime Minister and India has made its position globally in the startup arena.

This, he said, was largely because an environment has been created through adequate support for the startups at every stage and also facilities provided for revival of failure.

“Lakhs of youth are generating their own income and also getting jobs because of the boost to startups and they are the present and the future of the world. However, for the long-term success young entrepreneurs will have to understand that innovation and startups are about people and society rather than only about ideas,” he added.

The expo was organized under the aegis of the Department of Science and Technology (DST), Government of India in association with National Innovation Foundation-India (NIF). In this three-day exhibition, around 50 young innovators in various fields from Jammu and Kashmir as also from other parts of India displayed their products, technology, and services.

“The paradise of the world as Kashmir is called, can one day become the paradise of startups,” said Secretary Department of Bio-Technology (DBT), Government of India Dr Rajesh S Gokhale emphasizing the importance of bio resources of J&K in the startup movement.

He also said that bio-manufacturing could become a very important part of the startup movement in the state.

Secretary, Science and Engineering Research Board (SERB) and Senior Advisor, Department of Science and Technology (DST), Dr Akhilesh Gupta highlighted that while most of the countries seem to follow an innovation trend that is proportional to the development levels, India seems to have evolved as an exception following an innovation led growth trajectory.

Secretary of the Department of Science and Technology of Jammu and Kashmir, Saurabh Bhagat elaborated on the efforts by the state to support startups and innovators in the state. He also said that the Government of India has supported setting up of biotech parks and innovation hubs in the state.

The three-day event, which is the first-ever startup expo organized in Kashmir valley, was attended by a large number of Vice Chancellors, educators, entrepreneurs, government officials, scientists, and other stakeholders and this can go a long way to encourage youth towards a vibrant startup culture in the Union Territory (UT).