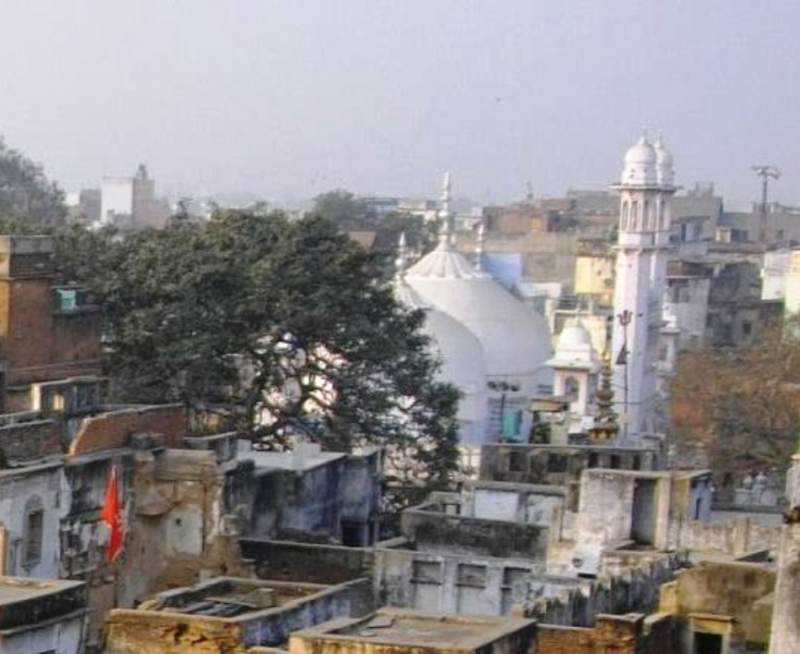 Varanasi/UNI: The district court on Thursday reserved its order on an application seeking carbon dating of the Shivling-like structure, the walls, Maa Shringar Gauri Sthal and other deities inside the Gyanvapi mosque complex.

Vishnu Shankar Jain, the counsel of four Hindu women, said a hearing on an application seeking an ASI survey and a scientific investigation was held in the court of District Judge Ajay Krishna Vishvesha.

He said now the court would pronounce its order on Oct 7.

He said the plea was opposed by the counsels of the Muslim side on the ground that the said structure is not a Shivling, but a fountain.

Jain claimed that when the four plaintiffs moved the Supreme Court for a survey by Archaeological Survey of India (ASI), the apex court permitted them to keep their side before the District Judge.

"We referred to the May 20 order the SC had permitted the District Judge that he is empowered to decide on all applications after which the district court has reserved its order and will be pronounced on Oct 7," he said.

However, carbon dating was opposed by the counsels of Rakhi Singh, plaintiff number 1 in the suit, on the ground that it will cause damage to the Shivling.

Maan Bahadur Singh and Anupam Dwivedi, counsels of Rakhi Singh, opposed the carbon dating method to be applied to ascertain the age of the Shivling-like structure and argued that on Sept 22 an application on behalf of plaintiff number 2 to 5 was moved seeking appointment of a commission of expert of ASI mainly for the determination of the age, nature and another constituent of the Shivling, found on May 16 during commission proceeding held by the Advocate Commissioner.

They argued that the application to issue a commission to determine the age, nature and other constituents of Shivling found during commission proceeding within temple precinct, by carbon dating technology, is totally misconceived and ridiculous as the said examination technique will damage the holy Shivling and the purpose of suit would not be met.

Singh's counsel said in case the holy Shivling is broken at any place, it will not be worth worshipping and the faith of the entire Hindu Sanatan religion will be severely hurt and the sanctity of the idol will come to an end forever.

They further argued that the plaintiff does not support the application seeking issuance of commission particularly in the matter of excavation of land beneath the Shivling and the determination of age, nature and other constituents thereof by carbon dating method.

"Moreover, the Shivling himself is irrefutable proof of his existence. He does not need any evidence in support of his existence yet the party does not believe in Hindu Sanatan. Dharma, he is free to prove otherwise but without causing any sort of damage to the holy Shivling," they said in their application.

"It is, therefore, most respectfully prayed that the court may kindly be pleased to reject the application of defendant no. 2 to 5 on grounds referred to above, so that justice be done," they said.