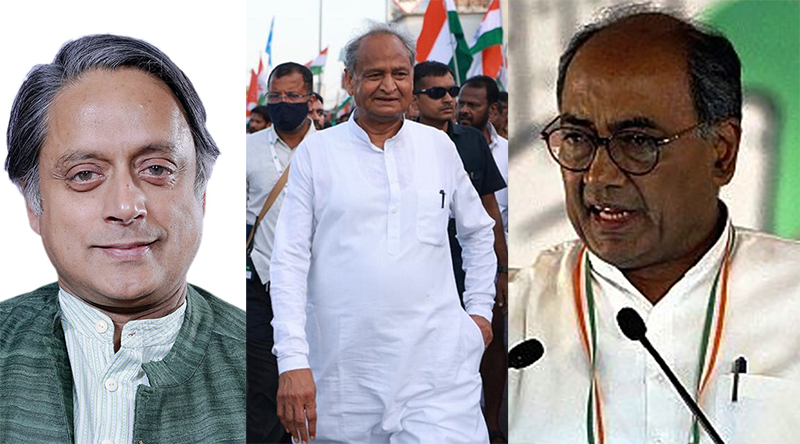 Congress prez poll: Gehlot likely to be in race with Digvijay Singh, Tharoor

New Delhi: Ashok Gehlot has been summoned by Congress top brass for a meeting on Thursday despite a dramatic coup by his supporter MLAs, speculations are rife that he could still be in the race, implying that he could be contesting with Shashi Tharoor and Digvijay Singh for the Congress President's post.

Ashok Gehlot was the choice of the Gandhis for the post of Congress President, but he has been unwilling to lose his grip over Rajasthan politics.

Reportedly, Congress top brass is unhappy over Ashok Gehlot's muscle flexing in Rajasthan. On Sunday, more than 90 MLAs submitted their resignation, asserting that the next chief minister should be picked up from among those who helped the Congress survive the coup staged by Sachin Pilot if Gehlot became the party president.

Gehlot doesn't want to give up the post as it is his means to wield his power in the state and keep his flock together. Initially, he had conveyed to the Gandhis that he would want to remain the CM for some months while also heading the party. In the meantime, he wanted to find his proxy to rule the state in his absence.  He also hoped to persuade Rahul Gandhi to helm the party.

If not, he wanted to remain the CM with himself as the working president and Sonia Gandhi as the full-time chief.

However, he reluctantly gave in after Rahul Gandhi asserted the party's rule of 'one man, one post'.

He comes with extensive organisational and administrative experience. A staunch critic of RSS, and Hindutva ideologies, Singh can help Congress to plan strategies against them in the upcoming 2024 Lok Sabha polls.

On the downside, he often ends up making controversial remarks and lands himself and his party in soup. For example, Singh criticised the United States in 2011 for not respecting Osama bin Laden's religion when it buried him at sea, saying "however big a criminal one might be, his religious traditions should be respected while burying him." Congress's leadership distanced itself from his views.

Singh later said that his statement should not be interpreted as support for or opposition to bin Laden, adding "I had merely said that the worst of criminals should be cremated according to their faith. He is a terrorist and he deserved the treatment that he got."

Shashi Tharoor is relatively a newcomer to Congress. He joined the party in 2009 and won three Lok Sabha elections in a row.

The Thiruvananthapuram MP is popular for his English skills and comes across as a logical, charismatic, and articulate leader. He is popular among the Indian middle class.

Tharoor has worked at the United Nations and also has administrative experience from when he served as a minister.

Unlike Gehlot and Singh, Tharoor lacks organisational experience and is not very articulate in Hindi.

Vocal about sweeping organisational changes and free and fair internal elections, he is said to be not so favourite of Gandhis for the party's top post.

The last time Congress held the presidential election was in 2017 when Rahul Gandhi was the candidate. Voting was not required as no one challenged him.