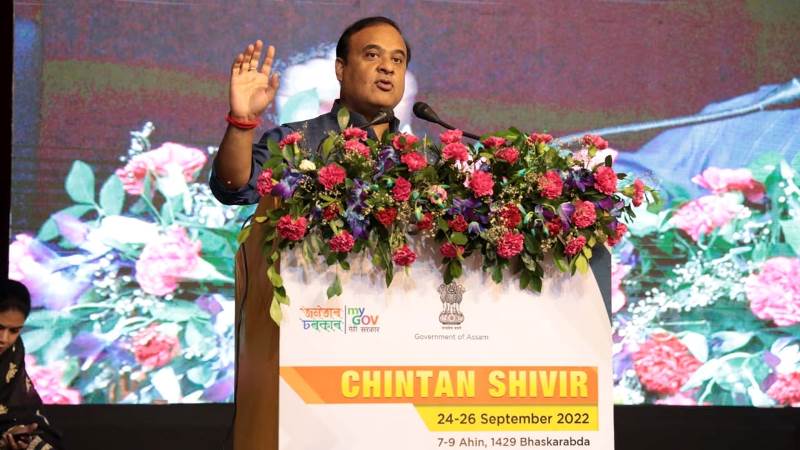 Guwahati/IBNS: Assam Chief Minister Himanta Biswa Sarma said that the state government should shed its conventional role of a regulator and perform as a facilitator to help different stakeholders to bring about a paradigm shift in the development of the state.

Speaking on the concluding day of Chintan Shivir held at Kaziranga, Chief Minister Sarma said that the Assam government is committed to work as a facilitator to assist all stakeholders to unleash their energies for the development of the state in a time-bound manner.

He said that the government organized the three-day Chintan Shivir to deliberate on action points where the State government can work for the targetted goal in a stipulated time frame to enable the people of the state to reap rich dividends of governance.

He said that as an outcome of the Chintan Shivir, all departments would prepare certain action points indicating resources to be required to implement the points.

"The action points would subsequently be submitted to the government for perusal and necessary approval," Sarma said.

He asked the departments to prepare action points highlighting their vision for Assam for 2026.

"After preparing the action points the departments should share them with every employee of the departments to build strong belongingness so that everybody works together to reach the target by 2026," he said.

Sarma also called for inter-departmental coordination and the need for looking at the government as an entity and not the department in isolation.

The Chief Minister while speaking on the occasion also said that the state administration should prepare a blueprint for unleashing its own resources to expedite the growth of Assam.

He also said that the Chintan Shivir would facilitate collective efforts on the part of the government for generation of government's tax and non-tax revenue.

The Chief Minister also said that the government would create a Rs. 5000 crore fund for creating vocations for the youth in different sectors who do not get government jobs.

Moreover, Sarma said that Assam should organise a 'CSR conclave' to create a platform for the corporates to make more contributions to the state considering their footprints and markets in Assam.

He said for the convenience of administration and to take governance to the people, the Assam government would take the digitisation process to a new level.

He also said that to ensure security on the social sector, especially in the tea garden areas, all the tea garden hospitals need to be made functional with the ability to perform institutional delivery. Moreover, steps will be taken for setting up blood banks to address the issue of maternal mortality.

He said that the government will also ensure that no post of doctors remains vacant in the state, especially in the char and tea garden areas.

The Chief Minister further said that the government will work for reviving the plywood industry in the state. Moreover, during the last 16 months, the Government has taken several decisions, Sarma asked Chief Secretary to prepare a 'Compendium of decisions' and publish it.

On the sidelines of the Chintan Shivir, Chief Minister, Sarma held a talk to a delegation of PM's Economic Advisory Council led by its Chairman Dr Bibek Debroy.

Besides presenting Assam, its potential and resources that can guide the development narrative of the state, he also put forward the perennial problems which sometimes stand in the way of the expeditious growth of Assam.

Sarma thanked the delegation for having visited Assam and graced the Chintan Shivir. Member of EAC -PM Shri Sanjeev Sanyal and Joint Secretary to PMO Pawan Kumar Sain were also present during the meeting.