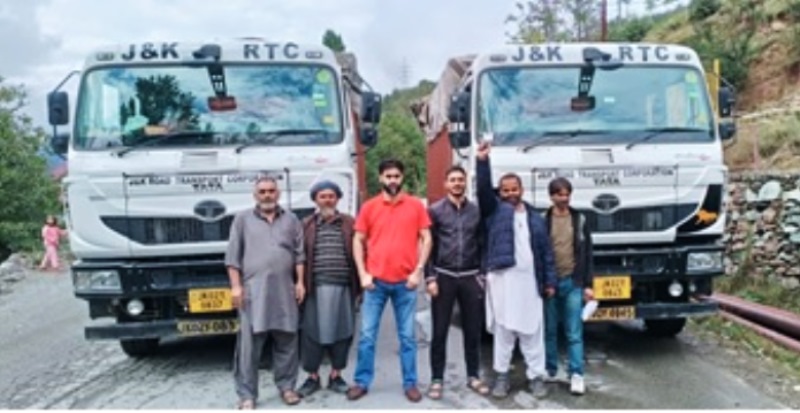 JK nomads wave farewell to journey by foot, being provided transport facility by the govt

Srinagar: As the winter is around the corner, the nomadic Bakarwal tribe of Jammu and Kashmir begin moving from the upper reaches to the plains of Jammu starting October in order to avoid the harsh Kashmir winters.

Every year by the end of March, thousands of nomads begin their annual seasonal journey with lakhs of sheep and goats from the Jammu region to reach the Kashmir valley.

These families embark on their journey towards the alpine pastures for grazing during the summer before returning to warmer districts of the Jammu region in October as the temperature goes down.

Instead of their regular movement on foot which would take weeks of marches and halts, the tribal families and their livestock have now been offered a lift.

Earlier, J&K’s tribal affairs department used trucks for the transportation of livestock and families of the migratory tribal population from various highland pastures in Kashmir to the Jammu districts.

A senior government official said that seven lakh people from tribal communities, including Gujjars and Bakerwals, travel every year with their livestock mostly from Jammu to Kashmir in summer and back in winter.

The transport facility will reduce the travel time of some of these families from 20-30 days on foot to 1-2 days.

The official said that migratory tribal families are starting their journey from central Kashmir's Budgam district to Rajouri.

"District administration Shopian and Budgam have made arrangements for transport and other facilities," he said.

He said that the reverse vertical migration of tribal families has started while govt transport is being provided from pick-up points in district Ramban.

"DC Ramban Mr. Mussarat Zia is supervising the arrangements for them, besides the help-desks have been established," he added.

The official further said the administration is working continuously at different levels to safeguard the rights of tribals and will work in a mission mode for their development and betterment.

Deputy commissioner Anantnag, Dr. Basharat Quyoom said that the first batch of 10 trucks with tribal migratory families and livestock on board from Anantnag departed for the Jammu region.

Out of ten, eight trucks reached safely while two are on the way.

At South Kashmir's Anantnag, several tribals while speaking to this reporter said that they are feeling very happy that the government is taking their journey seriously and helping them to go back.

"We can't believe that the government would provide us with transport facilities," says Abdul Suliman an elderly tribal from the Rajouri district.

He said that They used to face a lot of problems during their return journey, but now the government has provided us transport facilities which he described as positive measures for his community.

Similarly, Mohammad Zubair Khan, another nomad, said that this year, the government has provided all facilities to them.

"We hope that the government will provide us with similar facilities in the future," he said.

Arshee Bagum, another elderly lady from Poonch district, said it used to take us about twenty days to go back to Jammu from the hills of Kashmir, but now the transport facility has been made available to us by the government.

"Now it is almost heard that it takes us two days' journey to reach home," she said.

At Bandipora district, a group of nomads says that for the past several days, the administration has been in touch with them and is serious about sending them back to the Jammu region by providing transportation.

Similarly, in Central Kashmir's Ganderbal district, several nomadic families are preparing to go back from the high altitudes of the district.

"When we came to Kashmir in the month of March, even then we were provided with transport facilities by the government," Liyakat Khan a 56-year-old nomad said.

"We are preparing to go back and we will get a transport facility so it will take us very little time to reach our native villages of Rajouri district," he added.

Notably, the department of tribal affairs, for the first time, also initiated an exercise to assess the state of education viz a viz tribal students, literacy levels prevalent among the tribal population, and based on such surveys development of a comprehensive education plan to address specific educational needs besides the core efforts being made by the Education departments.

Another unique initiative in coordination with the School Education Department is silently changing the infrastructure landscape of schools in remote tribal areas under the pilot “Modernisation of Schools in Tribal Areas” launched in 2021.

In the first phase, 100 smart schools have been established across 20 districts at a cost of Rs 20 Cr and more than 200 schools are being taken up this year to be provided smart classrooms.

The village development plan for this year focuses on more than 100 Village-Panchayats for quality education infrastructure.