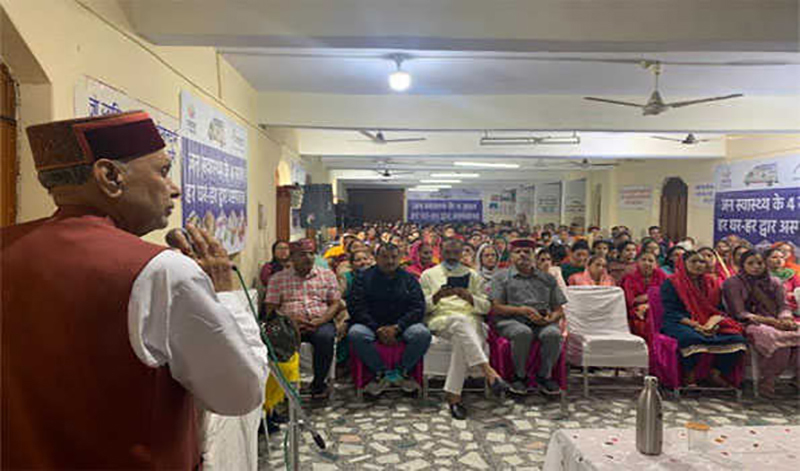 Hamirpur/UNI: Former Himachal Pradesh Chief Minister and senior BJP leader Prem Kumar Dhumal said on Sunday that the Mann ki Baat programme of Prime Minister Narendra Modi was people-oriented and through this "Modi Ji keeps the whole country in front of the countrymen, in which field, at what level, what is the work being done, which should become an inspiration for others."

He said this at Tounidevi where he listened to the 93rd programme of Mann Ki Baat along with party workers and leaders of the Sujanpur assembly segment today.

He said that in the Mann Ki Baat program organized, the Prime Minister gave detailed information about yoga and how a girl named Anika made her life happy through yoga.

Dhumal said that during the program the Prime Minister also congratulated people on the Navratris starting on Monday and also about the cleanliness campaign.

On this occasion, Dhumal paid tribute to the inspiration source of the party, Pandit Deendayal Upadhyay adding that he was the main brain behind the ideology of the party.

The BJP leader on this occasion called upon the party cadre not to sit silent and fan out in the masses to achieve the Mission-2022 target of the party. He said that the workers were the real forces behind the achievement and that their interests would be taken into consideration at all costs.

Dhumal said that the party was united like a rock and would win around fifty-five seats in the coming Vidhan sabha elections slated in November.

He said that the Congress party was a sinking ship and it would be wiped out from the political scenario of India after the 2024 Lok Sabha elections.

Dhumal dubbed the Bharat Jodo Yatra of the Congress party as Bharat toro yatra stating that through this yatra Rahul Gandhi was trying to become a hero but his desire would not be fulfilled.

He said that by not entering into the states of Gujarat and Himachal Pradesh during the yatra, the Congress party and Rahul Gandhi both conceded their defeat in the assembly elections in both these states.