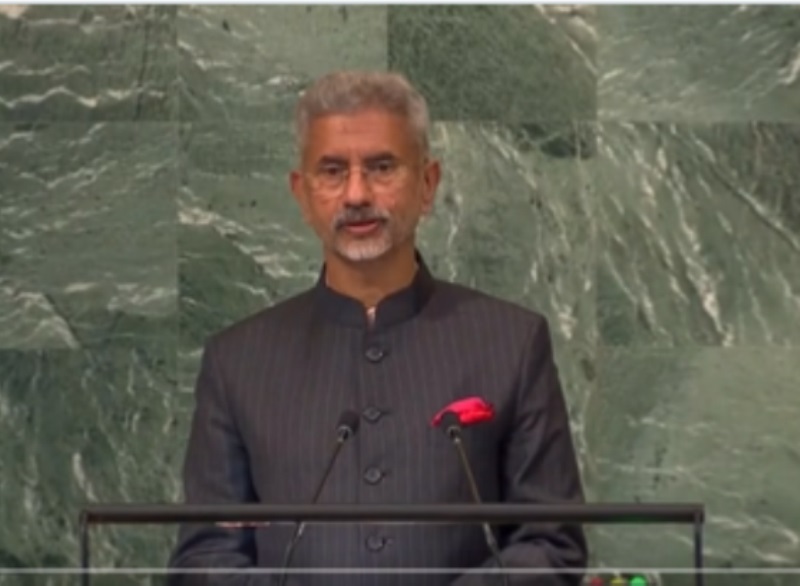 'No rhetoric can ever cover up blood stains': Jaishankar's jibe at China, Pak-backed terror

United Nations: "No rhetoric, however sanctimonious, can ever cover-up blood stains," External Affairs Minister S Jaishankar said Saturday in a strong message against terrorism and asserted that nations who defend proclaimed terrorists in the United Nations neither advance their own interests nor their reputation, a signal to China and Pakistan.

Addressing the high-level UN General Assembly session, Jaishankar said those who politicise the UNSC 1267 Sanctions regime, sometimes even to the extent of defending proclaimed terrorists, do so at their own peril.

"Having borne the brunt of cross-border terrorism for decades, India firmly advocates a 'zero-tolerance' approach. In our view, there is no justification for any act of terrorism, regardless of motivation. And no rhetoric, however sanctimonious, can ever cover up blood stains," he said.

"The United Nations responds to terrorism by sanctioning its perpetrators. Those who politicise the UNSC 1267 Sanctions regime, sometimes even to the extent of defending proclaimed terrorists, do so at their own peril. Believe me, they advance neither their own interests nor indeed their reputation," he said.

Islamabad's all-weather ally China has repeatedly vetoed proposals by India, US, and other western allies to blacklist Pakistan-based terrorists under the Security Council's sanctions regime in 15-nation Council.

India's Statement at the General Debate of the 77th session of #UNGA. https://t.co/WuNNyRth4y

Recently, China blocked India and the United States' attempt to blacklist  Pakistan-based Lashkar-e-Taiba (LeT) terrorist Sajid Mir, one of India's most wanted terrorists and the main handlers of the 2007 Mumbai attacks.

This was China's third move in four months in obstructing the sanctioning of Pak-backed terrorists at the UNSC.

In August, it prevented the process initiated by the US and India by which Abdul Rauf Azhar, the brother of Jaish-e Mohammed (JEM) chief Masood Azhar, could be blacklisted. In June, China put another hold on a proposal to list Pakistan-based terrorist Abdul Rehman Makki.

Beijing, which calls itself an all-weather friend of Pakistan, has repeatedly put on hold India and US's proposals to sanction Pakistan-based terrorists under the sanctions committee of the UNSC.

Abdul Rehman Makki is a US-designated terrorist and brother-in-law of Lashkar-e-Taiba head and 26/11 mastermind Hafiz Saeed.

Sajid Mir was indicted in the US in April 2011 for this role in the Mumbai 2008 attacks.