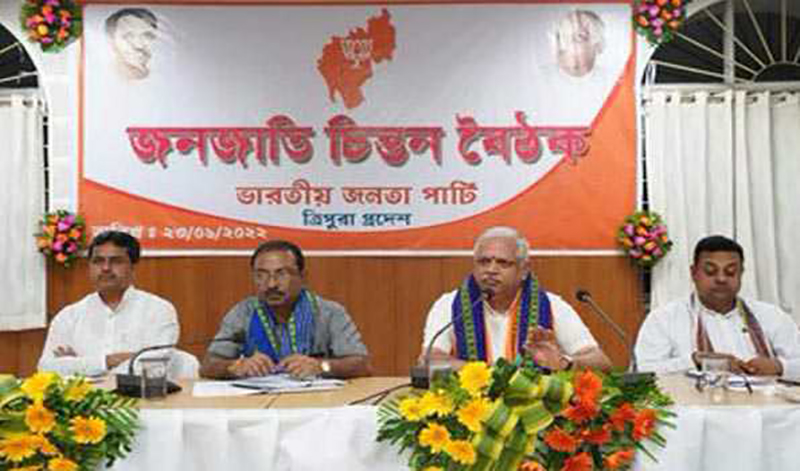 Agartala/UNI: BJP national general secretary (organization) B L Santosh arrived in Tripura on a two-day tour beginning Friday following massive dissidence among ruling party leaders and continuous desertion of the party by legislators and holding meetings with the party functionaries.

He held a separate meeting with all ministers and MLAs of BJP in presence of BJP general secretary to Assam and Tripura Phanindranath Sharma and North East coordinator Dr Sambit Patra and issued advisories where he expressed displeasure over the violence and political attacks on opposition parties, BJP sources said.

Santosh has also reviewed the performance of the ministers and MLAs, as part of the roadmap of upcoming assembly elections, sources claimed to add, "The party has already been into electioneering and finalizing the list of candidates for the assembly poll slated for February next year."

According to the report, Tripura's party has been divided into several groups over the dominance in functioning and command for the last three years.

Despite course correction efforts of the party central leadership including changing the Chief Minister, the situation has not improved.

Several MLAs, ministers, and leaders of BJP’s youth wing were accused of mobilizing criminals and anti-social elements in perpetrating violence against the opposition supporters and leaders.

Besides, central BJP leaders, state president, Chief Minister, and Deputy Chief Minister have been opposing such criminal acts, another group is doing the reverse instead of strengthening the party base.

The leaders alleged; former Chief Minister elected to Rajya Sabha Biplab Kumar Deb during his tenure had persuaded personal vendetta against a large section of BJP leaders including MLAs and media. He had given most of the contracts and business opportunities illegally to his favoured group and outsiders without considering the party’s future.