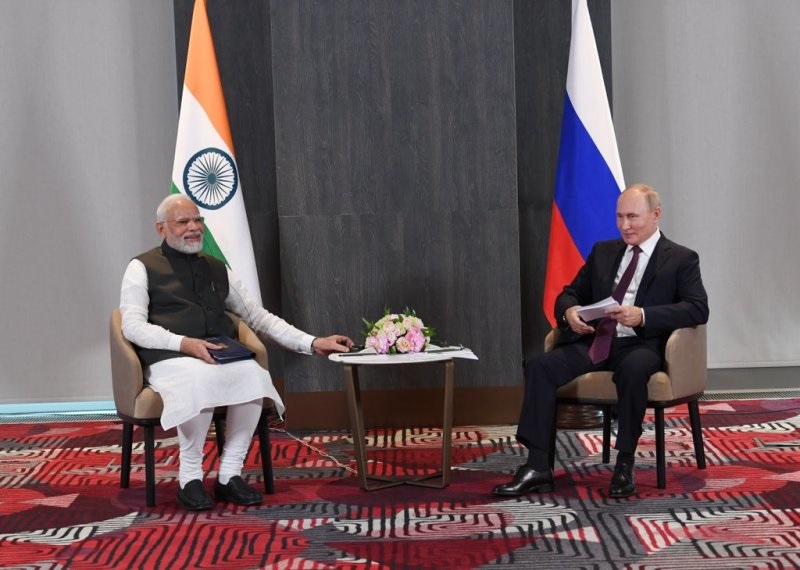 SCO Summit: 'Not an era of war' Modi tells Putin; he replies 'understand your concern'

Samarkand: Prime Minister Narendra Modi held productive discussions with Russian President Vladimir Putin on a range of issues aimed at further strengthening the ties between the two countries on the sidelines of the Shanghai Cooperation Organisation (SCO) summit at Samarkand in Uzbekistan, according to Prime Minister's Office (PMO).

In his face-to-face talk with the Russian President, Modi told Putin this wasn't the era of war but peace as the Ukraine War entered its seventh month.

In the context of the ongoing conflict in Ukraine, Prime Minister reiterated his call for early cessation of hostilities and the need for dialogue and diplomacy.

"Today's era isn't of war and I've spoken to you about it on the call. Today, we'll get the opportunity to talk about how we can progress on the path of peace. India-Russia has stayed together with each other for several decades," PM Modi told Vladimir Putin in a face-to-face meeting, the first since Russia invaded Ukraine in February.

The leaders discussed important issues of bilateral cooperation as well as regional and global issues of interest on the sidelines of the SCO summit.

"We spoke on the phone several times about India-Russia bilateral relations and also on various issues. We should find ways to address the problems of food, fuel security & fertilizers," PM Modi said.

The leaders appreciated the sustained momentum in bilateral ties, including contacts at various levels.

This was the first meeting of both leaders this year, which marks the 75th anniversary year of the establishment of diplomatic relations. They agreed to remain in touch.

During the meeting, Russian President Vladimir Putin told PM Modi that Moscow will keep New Delhi informed about the developments in Ukraine.

"I know about your position on the conflict in Ukraine and also about your concerns. We want all of this to end as soon as possible. We will keep you abreast of what is happening there," Putin said.

Stressing that the relations between India and Russia have increased manifold, the Prime Minister said the ties between the two countries are always closely watched by the world.

"Whatever feelings you have expressed for India in the SCO summit today, I am very grateful to you for this," Modi told Putin.