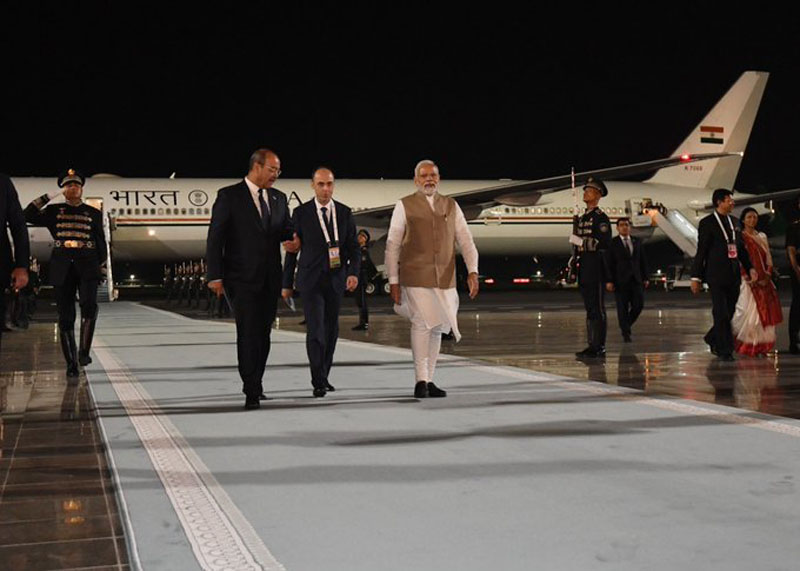 Samarkand: Prime Minister Narendra Modi landed here on Thursday evening to take part in the 22nd meeting of the Council of Heads of State of the Shanghai Cooperation Organization (SCO).

The Summit will have two sessions: Restricted Session which is only for SCO member States and then, the Extended Session that will likely include participation by observer countries.

During the Summit, the leaders are expected to review the organization’s activities over the past two decades and discuss the state and prospects of multilateral cooperation in the future.

Discussions during the Summit are expected to cover topical, regional and international issues, reform and expansion of SCO, strengthening connectivity as well as boosting trade and tourism in the region.

A Samarkand Declaration and numerous other documents are expected to be finalized during the Summit.

Landed in Samarkand to take part in the SCO Summit. pic.twitter.com/xaZ0pkjHD1

The Prime Minister is also scheduled to hold bilateral meetings with Russian President Vladimir Putin, Uzbekistan President Shavkat Mirziyoyev and Iranian President Ebrahim Raisi on the sidelines of the Summit.

During the SCO Summit, Prime Minister Narendra Modi and Chinese President Xi Jinping will come face to face for the first time since the border clashes between Indian and Chinese troops in Galwan Valley.

Notably, Modi and Jinping are taking part in the Summit at a time when the disengagement process between Indian and Chinese troops in the Gogra-Hot Springs (PP-15) area has been completed on September 12 as per the understanding reached between the two sides.

Prime Minister Narendra Modi's bilateral meeting with Russian President Vladimir Putin will happen for the first time since the outbreak of Covid pandemic and hostilities between Russia and Ukraine.

Before leaving New Delhi, Prime Minister Narendra Modi, in his departure statement, said that he looks forward to exchanging views on topical, regional and international issues, the expansion of SCO and on further deepening of multifaceted and mutually beneficial cooperation within the Organization.

Under the Uzbek Chairship, a number of decisions for mutual cooperation are likely to be adopted in areas of trade, economy, culture and tourism, the Prime Minister added.

The SCO Summit is taking place amid significant global developments including the Ukraine conflict and the Taiwan strait crisis.