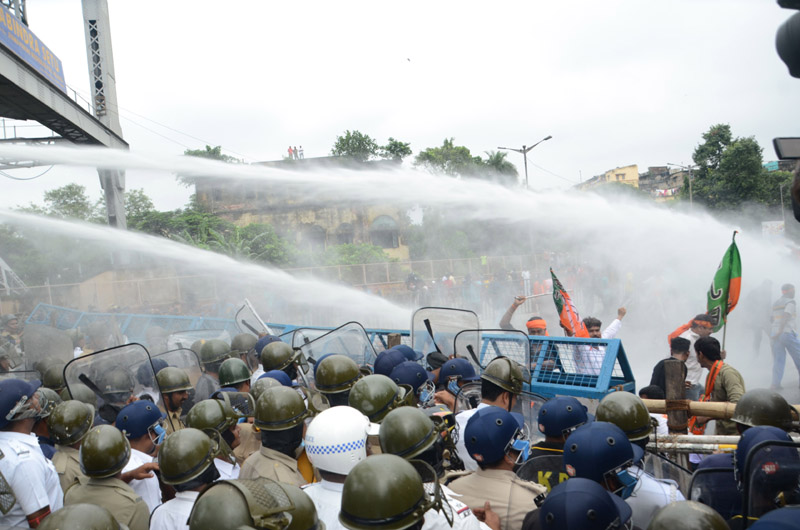 Kolkata: Clashes between the police and BJP workers broke out and leader of the opposition Suvendu Adhikari was detained as the saffron party activists began their March to Nabanna (the state secretariat) on Tuesday in protest against rampant "corruption" of the state's ruling Trinamool Congress.

Adhikari, who was put into a prison van before he could reach Satragachi of Howrah district, alleged that a "mortally afraid" Trinamool Congress was using the police to prevent his party workers from reaching Nabanna peacefully.

The Police put up heavy barricades at Hastings near the state government's New Secretariat Building much before the BJP's march began.

Even buses carrying party supporters on their way to the city were stopped by the police at different places.

While posting video clips under the caption "Glimpses of WBPolice atrocities," Adhikari said, "They are trampling upon the Fundamental Rights of citizens ensured by Article 19 of The Constitution Of India: to assemble peaceably to move freely throughout the territory of India People are resisting spontaneously."

Mamata Police is on a war footing, trying to crush a democratic political event.
The barricade of steel raised at Santragachi symbolizes her anxiety & timidity.
Remember this @MamataOfficial, no wall can stand up to the 'wave of democracy', it would be breached sooner than later. pic.twitter.com/0HKUNBf64s

"West Bengal has become North Korea." Adhikari maintained. " Police should aid protesters to ensure law and order are maintained during the rally, not bar them," BJP leader Roopa Ganguly said.

Policemen put up a series of barricades at Howrah Bridge (Rabindra Setu) from where former state unit president Dilip Ghosh is scheduled to lead a rally on way to Nabanna.

"The Inspector in Charge of Jhargram Police Station; Biplab Karmakar can be seen brandishing his service revolver (while being in civil clothes) to scare BJP Bengal Karyakartas & threaten them not to go to Kolkata & join the March to Nabanna, " Ghosh alleged on his Twitter account.