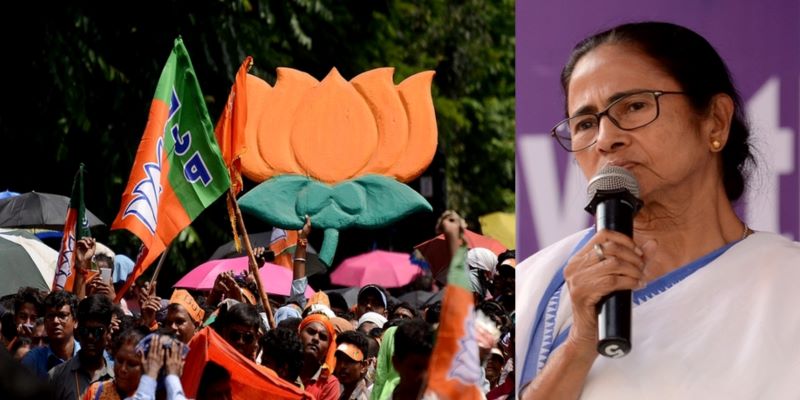 Several Bharatiya Janata Party (BJP) workers in various districts have been detained by West Bengal police as the state's primary opposition party is set to hold a march to Chief Minister Mamata Banerjee's office, Nabanna, in Howrah in protest against the scams where a number of ruling Trinamool Congress (TMC) leaders came under the scanner.

The march, dubbed as Nabanna Abhiyan, is scheduled to begin at 1 pm.

UPDATE: Suvendu Adhikari detained by police while he was on his way to Santraganchi

People of Bengal fed-up with TMC are supporting #CholoNobanno in large numbers. pic.twitter.com/vyO3zvNqJf

Seven trains were entirely booked to drive in BJP workers from various districts, where the march has already heated up the political tension.

Meanwhile, police, who have denied permission to hold the march, have put up barricades with guard rails in Howrah to thwart the rally from reaching the state secretariat Nabanna.

Turning rebel against the police, Majumdar told the media, "The Chief Minister and state government are afraid of us so police have been used to stop us."

They are trampling upon the Fundamental Rights of citizens ensured by Article 19 of The Constitution Of India:
# to assemble peaceably
# to move freely throughout the territory of India

The state politics is on the boil after an unprecedented scene of recovery of cash worth Rs. 50 crore from Chatterjee's aide Arpita Mukherjee's two flats were telecast live on television.

Chatterjee, a former state education minister, was arrested by the Enforcement Directorate (ED) in connection with the teacher recruitment scam.

Mondal was arrested from his residence by the Central Bureau of Investigation (CBI) for his alleged involvement in the cattle smuggling case.

Despite distancing herself from Chatterjee, Mamata stood beside her trusted lieutenant Mondal accusing her arch-rival BJP of using central probe agencies to tarnish her party's image.