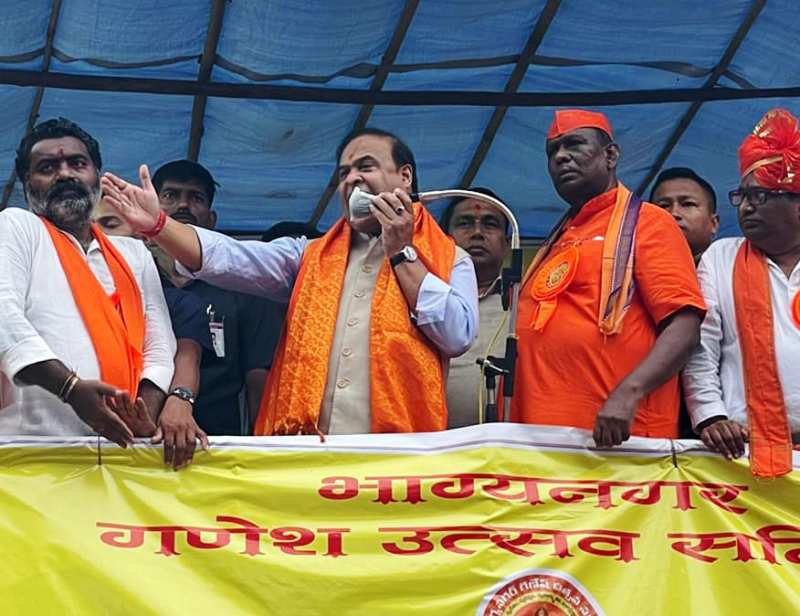 Hyderabad/IBNS: Asam Chief Minister Himanta Biswa Sarma's Hyderabad rally was marred by a security scare as a man tried to tear away the mic from its stand on the stage in presence of the BJP leader.

However, the BJP leader stood by seeming unfazed.

Meanwhile, the man was also seen glaring at Sharma and saying something.

#WATCH | Telangana: A man tried to confront Assam CM Himanta Biswa Sarma by dismantling the mike on a stage at a rally in Hyderabad pic.twitter.com/HFX0RqVEd8

The man, who was wearing a magenta scarf - the colour of Telangana Chief Minister K Chandrashekar Rao or KCR's party - was quickly overpowered and taken off the stage.

Sarma is in Hyderabad as a guest of the Bhagyanagar Ganesh Utsav Samiti for the Ganesh festival and other events.

The Assam CM, who visited a prominent temple in the city earlier in the day, slammed his Telangana counterpart.

"Chief Minister KCR speaks about BJP-free politics, but we speak about dynasty-free politics. We still see pictures of his son and daughter in Hyderabad. Country's politics should be free from dynastic politics," Sarma told news agency ANI.

"A government should be for the country, for the people, but never for a family. The country has a liberal front and an orthodox one, and polarisation between the two has always existed," he added.

The BJP and KCR's Telangana Rashtra Samithi (TRS) have upped the attacks on each other in recent months ahead of next year's state polls and the national elections in 2024.