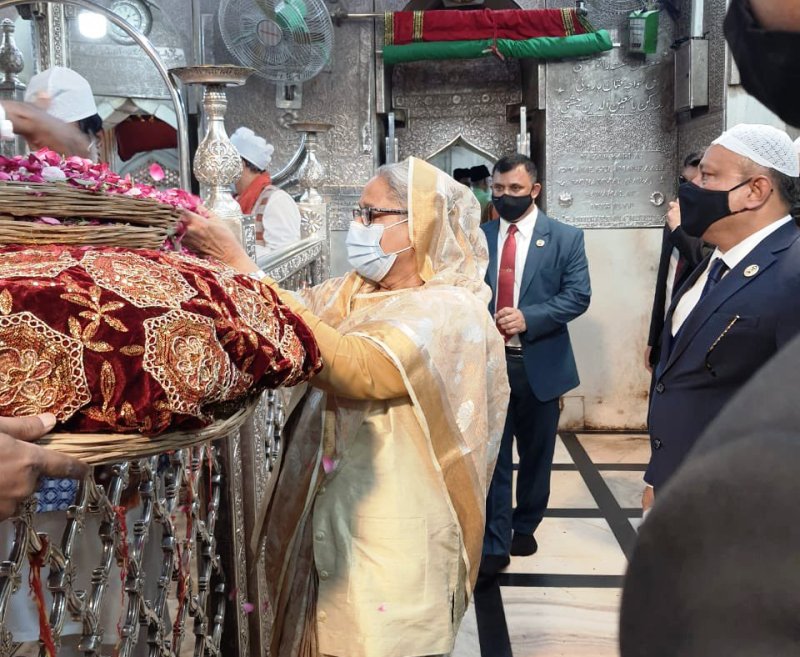 He said the premier spent some time offering Fateha and munajat there.

PM Sheikh Hasina offered prayers at the Dargah of Hazrat Khwaja Moinuddin Chishthi at Ajmer. Prayers were offered by the Khadim for Bangladesh, for India, and for the prosperity and friendship of people of both 🇮🇳 and 🇧🇩. pic.twitter.com/fB72qWKJb9

The Bangladesh prime minister started her India tour by visiting the much-revered Nizamuddin Aulia Dargah in New Delhi on Sept 6. She also offered prayers there.

The Bangladesh premier arrived at the Palam Airport in New Delhi on Sept 5 as India rolled out the red carpet to welcome Sheikh Hasina.

On the first day of her India visit, External Affairs Minister Dr S. Jaishankar paid a call to her at the summit room of ITC Maurya Hotel in New Delhi.

Sheikh Hasina had bilateral talks and a one-to-one meeting with Prime Minister Narendra Modi at the Hyderabad House on the second day of her India visit on Sept 6.

The Bangladesh premier was formally received by her Indian counterpart while a ceremonial guard of honour was accorded to her.

Earlier today, I had excellent discussions with PM Sheikh Hasina in New Delhi. Bangladesh is a major trade and development partner of India. We cherish the people-to-people linkages between our nations. During our talks we reviewed the full range of bilateral relations. pic.twitter.com/MYDEEcHtGK

After holding the bilateral talks, seven MoUs (Memorandums of Understanding) were signed between the two neighbouring countries that included an MoU on the withdrawal of 153 cusec water from Kushiara River by Bangladesh.

During the talks with PM Sheikh Hasina, we discussed ways to further boost connectivity, ramp up our trade partnership and enhance cooperation in sectors like IT, energy and more. We will also work together to tackle the menace of climate change. pic.twitter.com/B3b4MppbbR

A joint statement was issued later in which India offered free transit to Bangladesh for exporting its products to other countries as Hasina and her Indian counterpart have reiterated their strong commitment to strengthening bilateral relations further.

On the same day, she joined a luncheon hosted in her honour by the Indian premier.

The premier paid homage to Mahatma Gandhi at Raj Ghat on Sept 6.

The next day, Minister for Development of the North Eastern Region of India G. Kishan Reddy and Nobel laureate Kailash Shatyarthi had called on the Bangladesh premier.

Congress leader Rahul Gandhi also paid a courtesy call on Sheikh Hasina at her palace of residence on the same day.

On September 7, the Bangladesh premier addressed a meeting with top business leaders and a ceremony for awarding "Mujib Scholarship" to direct descendants of soldiers, officers of the defence forces of India, who were martyred or critically wounded during the Liberation War of Bangladesh in 1971.