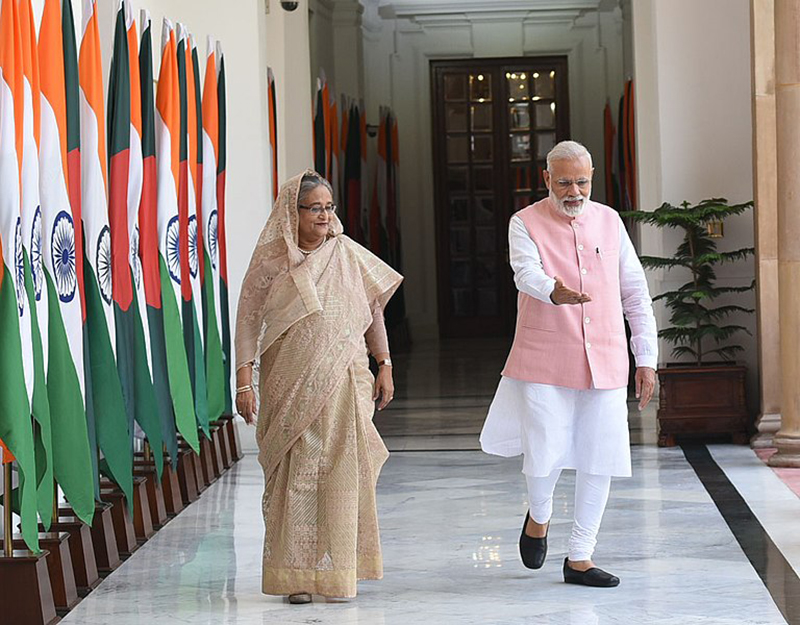 New Delhi/Dhaka (IBNS): Bangladesh Prime Minister Sheikh Hasina on Monday arrived in Delhi on a four-day visit to India. Her visit will focus on connectivity, energy, and food security as well as trade and investment opportunities between the two countries, reports ANI.

According to the report, while Bangladesh and India, two neighbouring countries, share similarities in terms of culture, economics, language, political history, and religion and despite the fact that India was instrumental in Bangladesh's independence, the relationship between New Delhi and Dhaka has never been especially warm or free of squabbles.

The bilateral ties between the two nations have grown over time as a standard model of cooperation wherein amicable solutions to impending problems are found through negotiations and constructive dialogues.

In recent years, several deals have been reached between India and Bangladesh in both the diplomatic and economic arenas.

Indian Prime Minister Narendra Modi's visit to Dhaka gave a boost to the relationship between both countries.

The ANI report said that both the two countries are closely collaborating in every sector, from security and border management to mutually beneficial trade and investment flows, enhanced bilateral and sub-regional multimodal connectivity, greater power and energy cooperation, developmental assistance and capacity-building exchanges, cultural and closer people-to-people ties.

Sheikh Hasina's visit to India assumes importance in the backdrop of turbulent months in recent times that have disrupted the green shoots of post-Covid-19 economic recovery in the South Asian Region, ANI reported.

Since India and Bangladesh have originated from an uninterrupted geographical, historical and cultural continuum, they have many shared resources and concerns.

Rivers are one of the most notable shared resources between the two nations, and the issue of water management and water sharing is very important in the bilateral cooperation agenda of New Delhi and Dhaka as India and Bangladesh share as many as 54 rivers.

India and Bangladesh have identified seven of these rivers for developing the framework of water-sharing agreements on priority.

It is also reported that the Bangladesh Prime Minister may seek assistance from India to fight its economic crisis and accelerate economic recovery.

During her visit, the Bangladesh PM is likely to initiate talks for having an India-Bangladesh Comprehensive Economic Partnership Agreement (CEPA).

According to ANI's report, it is also likely that the two Prime Ministers would discuss defence cooperation.