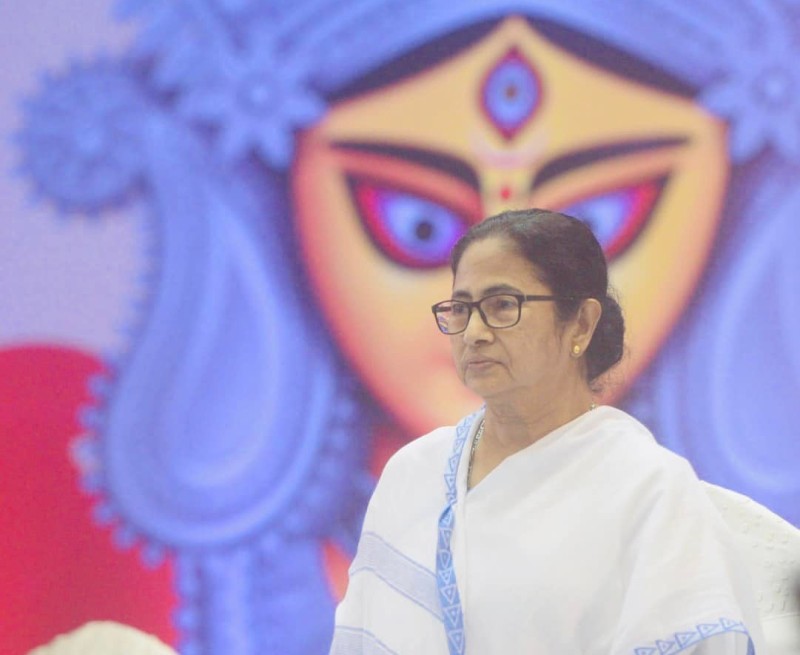 Kolkata/IBNS: West Bengal Chief Minister Mamata Banerjee Monday announced an increase in the yearly grant to Durga Puja organising committees in the state from Rs. 50,000 to Rs. 60,000 after the festival found a place in the UNESCO's List of Intangible Cultural Heritage of Humanity.

She also announced that the concession on electricity charges incurred by puja committees shall also be raised to 60 per cent from the current 50 per cent.

Banerjee said that a mega rally will be organised in Kolkata on Sept 1 to thank UNESCO for the honour.

Kolkata's Durga Puja is the first festival in Asia to have received this recognition from UNESCO.

The Bengal Chief Minister also declared that all state government offices will remain closed from Sept 30 to Oct 10 to mark the festival this year.

She made these announcements during a meeting with Durga Puja organising committee members at the city's Netaji Indoor Stadium on Monday.

The state government wants to promote Durga Puja as an international festival for which Banerjee has asked all puja organisers to ensure that foreign tourists do not face any problems during their visit to the city in this period.

The mega rally, slated for Sept 1, will start at 2 from Jorasanko Thakurbari (the birthplace of Rabindranath Tagore) in North Kolkata and will pass down Rani Rasmani Avenue and reach Dharmatala in Central Kolkata, the chief minister announced.

She has requested all puja organisers to participate in the mega procession.

Banerjee has also requested that students in grades 11 and 12 should be allowed to participate in the rally, which will roughly cover five kilometres.

She said representatives from UNESCO will attend the procession as guests.

"This year's puja is going to be special. We must plan very well this time. Lot of people from abroad are going to visit," Banerjee said.

While Durga Puja begins on Sep 30 this year, the Bengal Chief Minister said celebrations will begin early from Sept 1 itself with the mega procession.

"We will have a rally -- not a political rally, but a rally to welcome the Goddess. It will be like a carnival. We will thank the UNESCO with the rally on September 1, in the presence of Consul-Generals, prominent industrialists and other distinguished persons," Banerjee said.

Celebrations will not just be limited to Kolkata, but will also be held in the districts around the same time as the mega procession.

Taking a dig at the Centre, Banerjee said: "The centre has stopped funds even for the 100-day Programme. Our coffers are empty, but we are still increasing the financial assistance [to puja committees] from ₹50000 to ₹60,000. I pray, Maa Durga will fill our coffers. We are also increasing the concession on electricity bills for puja committees to 60 per cent from the current 50 per cent."

Targeting the Bharatiya Janata Party (BJP), she said: "People say, 'they don't allow Durga Puja in Kolkata.' They don't see that nowhere in the world is Durga Puja celebrated like the way it is in Kolkata."

There are around 43,000 registered Durga Puja committees in West Bengal, besides the smaller pujas and those by the traditional families. There are more than 2,141 Durga Pujas organised by women in Bengal.