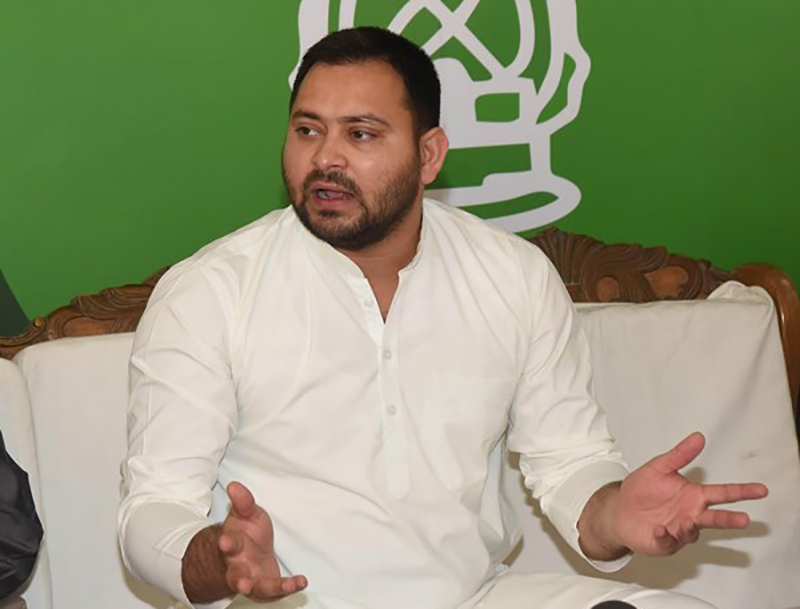 Patna: Bihar's new Deputy Chief Minister and RJD chief Tejashwi Yadav has issued a string of guidelines for his party MLAs, who have been inducted as ministers in the state government.

A total of 31 ministers have been inducted into the new government after Nitish Kumar's JDU (Janata Dal United) severed ties with BJP and formed an alliance with the RJD-led Grand Alliance.

RJD got a significant share of 16 ministers while 11 from Nitish Kumar's JD (U) were sworn in as ministers.

Tejashwi Yadav's office emphasised that the guidelines were 'important for all ministers of the RJD quota'.

According to the guidelines, a minister from the RJD quota will not buy any new vehicles for themselves in the department.

Such ministers will not allow workers, well-wishers, supporters or any other person older than them to touch their feet. Instead, they will use the tradition of salutation, namaste and adaab with folded hands for courtesy and greetings.

All the ministers are requested to maintain gentle and courteous behaviour with everyone and the conversations should be positive. While dealing with simplicity, it will help the poor and needy people of all castes/religions on a priority basis without delay.

The guidelines also sought to encourage the exchange of books and pens instead of giving and giving flowers/bouquets as a gift. "And I would request this change be brought into effect continuously," read the guidelines.

Ministers will promote the working style of honesty, transparency, promptness and prompt implementation under the leadership of the Hon'ble Chief Minister in all departmental works.

All the honourable ministers, the respected Chief Minister of the Government of Bihar and their subordinate departments, work plans and development work will be continuously promoted on social media so that the public can get positive information about your every initiative.