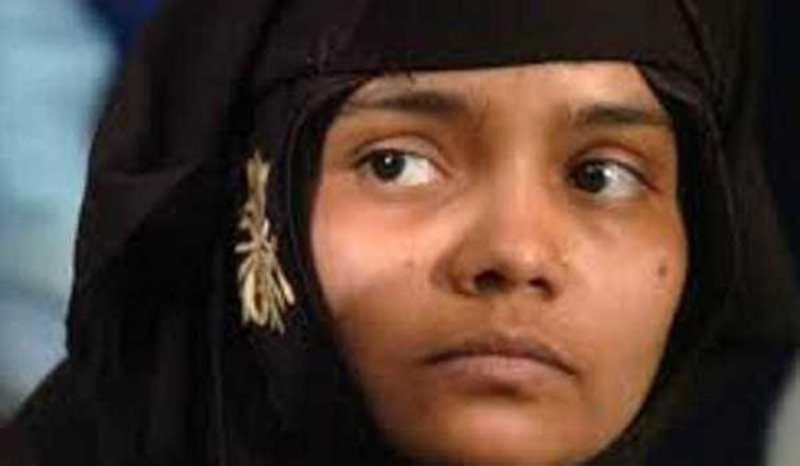 'Give me back my right to live without fear and in peace': Bilkis Bano after release of 11 convicts

New Delhi/IBNS:  In her first reaction after the release of 11 men, including those convicted of gang-raping her and murdering seven members of her family during the 2002 Gujarat riots, Bilkis Bano on Wednesday said the move had "shaken her faith in justice".

"Two days ago, on August 15, 2022 the trauma of the past 20 years washed over me again. When I heard that the 11 convicted men who devastated my family and my life, and took from me my 3-year-old daughter, had walked free," Bilkis Bano said in her statement.

"I was bereft of words. I am still numb. Today, I can say only this - how can justice for any woman end like this? I trusted the highest courts in our land. I trusted the system, and I was learning slowly to live with my trauma," she said.

"The release of these convicts has taken from me my peace and shaken my faith in justice. My sorrow and my wavering faith is not for myself alone, but for every woman who is struggling for justice in courts," she said.

"No one enquired about my safety and well-being, before taking such a big and unjust decision. I appeal to the Gujarat Government, please undo this harm. Give me back my right to live without fear and in peace. Please ensure that my family and I are kept safe," she added.

Bilkis Bano was 21 when she witnessed seven members of her family getting murdered including her toddler daughter.

Seven other relatives, who according to her were also killed, were declared "missing". The woman, who was five months pregnant, was then gang-raped.

The convicts were freed as India celebrated 75 years of Independence on Monday and were greeted with sweets, hugs and garlands by groups with alleged links to the ruling BJP.

Opposition parties have strongly hit out at Prime Minister Narendra Modi over the move that came within hours of his praise for "Nari Shakti" in his Independence Day speech. They said this is the "real face" of New India under the BJP.

Former Congress president Rahul Gandhi questioned what message was being sent out to the women of the country.

“Those who raped a five-month pregnant woman and killed her three-year-old daughter were released during 'Azadi ka Amrit Mahotsav'.

"What message is being given to the women of the country by those who peddle lies about 'Naari Shakti'?” Rahul Gandhi tweeted.

Congress general secretary Priyanka Gandhi attacked Modi referring to his Independence Day speech, when suddenly he had turned emotional on account of disrespect shown to women during his nearly one and half hour speech.

She questioned whether "respect for women was only for speech service".

"The release by the BJP government of the criminals who were convicted from all the courts for the crime of gang rape and murder of a pregnant woman, welcome in front of the camera - is it not the height of injustice and insensitivity (sic)?

"Narendra Modi ji, respect for women only for speeches? Women are asking," she said.