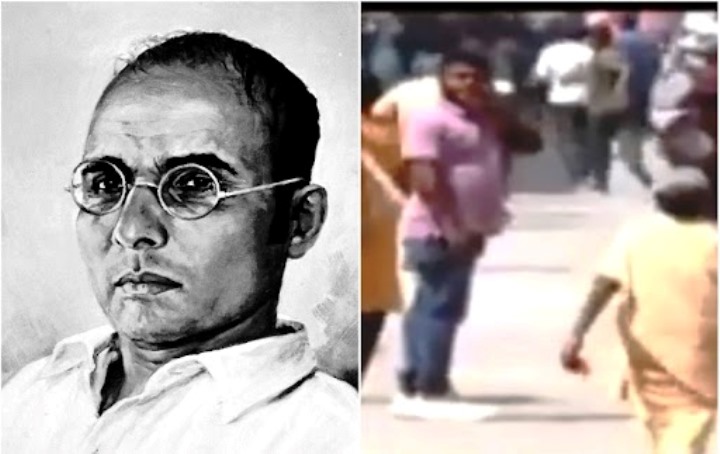 Prohibitory orders in Karnataka's Shivamogga after clashes over Savarkar poster

Bengaluru/IBNS: A man was stabbed in Karnataka's Shivamogga district as two groups allegedly clashed over a banner featuring the photo of Vinayak Damodar Savarkar, whom the Bharatiya Janata Party (BJP) considers one of its biggest icons.

According to reports, while one group had put up the poster, another removed it and tried to replace it with a poster featuring Tipu Sultan, the 18th Century ruler who had fought against the British and was killed in the fourth Anglo-Mysore war.

Soon after the clash, the police came and confiscated the poster.

They also had to use batons to disperse the crowd and bring the situation under control. Officials installed the national flag at the spot where the poster was placed.

Following this, prohibitory orders have been placed banning large gatherings in the area and additional forces have been called in.

"We have imposed Section 144. Tension flared and so we resorted to lathicharge. We have tried to dismiss the crowd. We are verifying if he was stabbed over the same issue," Laxmi Prasad, a senior police officer of the area, told the media.

The man stabbed in the clash is undergoing treatment at a nearby hospital. The police said he is stable.

Celebrating Tipu Sultan has become controversial in the state, with the BJP and its ideological parent Rashtriya Swayamsevak Sangh (RSS) dubbing him a brutal king who persecuted Hindus and Christians, especially those who refused to convert to Islam.

The erstwhile Congress government's decision to celebrate the birth anniversary of Tipu Sultan was vehemently opposed by the locals in Coorg, where his kingdom existed.

The violence follows Sunday's controversy over an advertisement by the state's BJP government which omitted the photo of the country's first Prime Minister Jawaharlal Nehru and included Vinayak Savarkar.