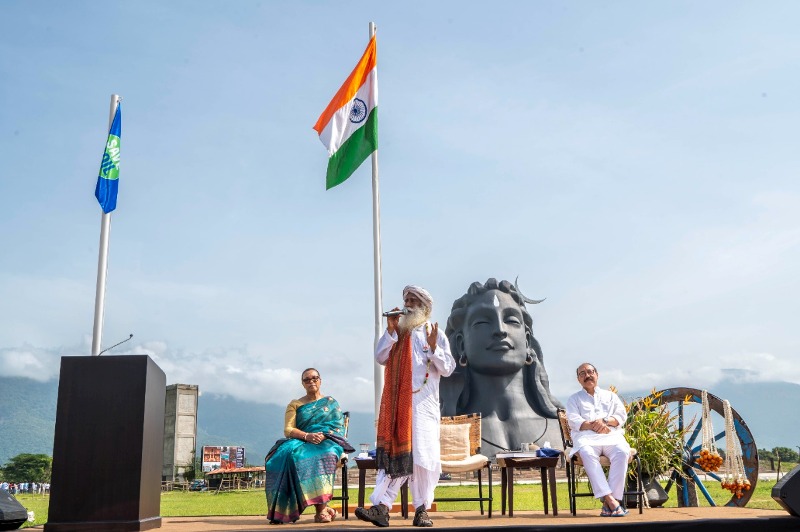 India is the direction world will move in next decade: Sadhguru

Coimbatore/UNI: Isha Foundation originator Sadhguru Jaggi Vasudev on Monday said India is the direction the world will move in the next decade.

"To make your life pleasant within you is a very simple process. Unfortunately, a large segment of humanity is struggling and grappling with that. In this sense, India is the direction that the world will move in the next decade for sure," he said during the 75-year anniversary celebrations of Indian Independence Day at Isha Yoga Center here.

"This is a nation that has always been a beacon for anybody who looked for consciousness, for inner well-being, for understanding the deeper dimensions of our existence here on the planet," Sadhguru said referring to the rise of mental health issues that now he deemed is "no more an individual experience but has become a societal experience."

"For thousands of years, whenever men were troubled in different parts of the known world of that time, they naturally moved towards India. It has always been so. It is once again important we create that possibility because this is our USP, the inner well-being."

"75 years of Independence! What a momentous day. Wonderful to celebrate with our dear guests - Secretary-General of the Commonwealth Ms. @PScotlandCSG & Shri. @HarshShringla, G20 Chief Coordinator, Govt of India," Sadhguru tweeted.

Patricia congratulated the country on the 76th year of Independence, seeing India’s non-violent freedom struggle as an inspiration for the world.

Recalling the inspirational leadership of Mahatma Gandhi, Sardar Patel and BR Ambedkar in the freedom struggle and during the formation of modern India, Patricia acknowledged the critical role of India in the Commonwealth.

She observed, “without India, the Commonwealth would be fundamentally different. And India’s role in our family of nations is commensurate with her scale.”

Drawing attention to the challenge of the climate crisis, Patrcia identified the crucial role of Save Soil, a global movement launched by Sadhguru, to address the soil crisis in the world, to be in sync with the Living Lands Charter that mandates Commonwealth member countries to safeguard global land resources and arrest land degradation.

Speaking at the occasion, Shringla announced Isha Yoga Center in Coimbatore as one of the venues for G20 meetings.

India is all set to host the G20 summit which will be presided over by it next year.

India plans to host the 190 meetings of the G20 across all the Indian states.