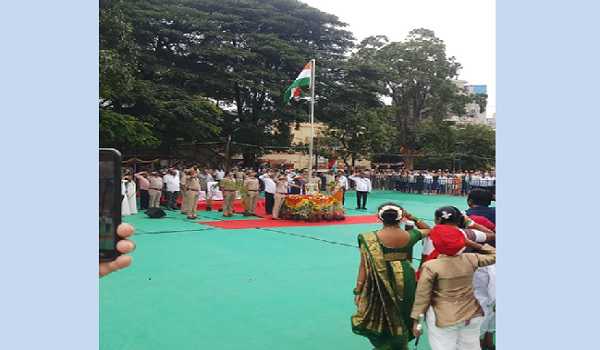 Bengaluru: For the first time in history, the national flag was hoisted at Idgah Maidan, on the occasion of independence day here on Monday.

The hoisting of the tricolor comes in the wake of provocative statements made by Congress MLA Zameer Ahmed Khan and Vishwa Sanatan Parishad President S Bhaskaran over offering Ganesha pooja at the Idgah Maidan.

Khan had said Ganesha pooja would not be allowed at Idgah Maidan, while Bhaskaran countered by saying that the Hindu activists would conduct pooja everyday and demolish the Qibla of the Idgah at the Maidan.

The police took cognisance of Bhaskaran's statement and a FIR was lodged against him.

He was booked for promoting enmity between two different groups on the grounds of religion and deliberate and malicious acts intended to outrage religious feelings.

Bhaskaran made these statements after the Bruhat Bengaluru Mahanagara Palike (BBMP) ruled that the Idgah Maidan belongs to the Revenue Department of Karnataka Government.

After hoisting of the tricolour and the singing of national anthem, 'Bharat Mata Ki Jai' slogans reverberated in the area, amidst tight security.